Skip to main content
Labels
Posted by Unknown May 16, 2013 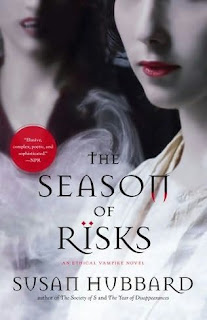 Synopsis: Aglow with the promise of her budding friendship with third-party presidential candidate (and closet vampire) Neil Cameron, Ari Montero returns to school frustrated, like most teenagers, that she’s just not old enough—darn it!—to be accepted in grown-up circles. But Ari isn’t like most teenagers. Half human, half vampire, she is destined to remain at the same tender age at which she crossed over. Her desire to achieve instant adulthood leads her to the Miami clinic run by a vampire notorious for his delusions of world domination. There she is injected with a serum that instantly takes her from 15 to 22.

Review: The third book in the Ethical Vampire series.  This series is one of the best new vampire series that I have read. I wouldn't consider this the best book in the series but it did have an interesting storyline.

Ari was 13 when she was turned now she is now in her 15th year although most of her friends believe she is 19 and attending University.  How would you like to be trapped in the same body you had at 13 with the same brain function? Well Ari wasn't thrilled with the idea, so when she learns about a drug that can age her 7 years including brain function she is understandably intrigued.  Of course what starts out as something innocent turns into something disastrous, leading Ari and her family on a roller coaster ride that leaves them in the middle of a political conspiracy with far reaching consequences.

There are a lot of great characters in this series.  My favorite is of course Ari with the new character of Sloan running a close second, I'm hoping that Ms. Hubbard writes some more so we can learn more about these two great characters.
Labels: Ari Montero ethical vampire series Society of S Susan Hubbard vampires