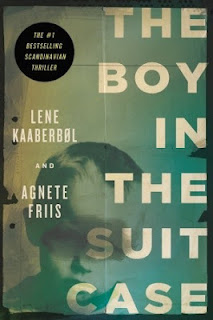 Synopsis: Nina Borg, a Red Cross nurse, wife, and mother of two, is a compulsive do-gooder who can't say no when someone asks for help—even when she knows better. When her estranged friend Karin leaves her a key to a public locker in the Copenhagen train station, Nina gets suckered into her most dangerous project yet. Inside the locker is a suitcase, and inside the suitcase is a three-year-old boy: naked and drugged, but alive.

Is the boy a victim of child trafficking? Can he be turned over to authorities, or will they only return him to whoever sold him? When Karin is discovered brutally murdered, Nina realizes that her life and the boy's are in jeopardy, too. In an increasingly desperate trek across Denmark, Nina tries to figure out who the boy is, where he belongs, and who exactly is trying to hunt him down.

Review: I'm a big fan of the Scandinavian crime book invasion.  I like their dark tone and slower pace, a lot of them remind me of the show The Killing on AMC. However, this book just left me a little flat.  I was originally drawn to this book because of the title and the true case of the boy in the suitcase that happened in Philadelphia, only that boy was found dead on a street corner.  This boy is found alive and in a train locker.

The book jumped around a bit too much for my taste and the main character Nina Borg just didn't strike me as this heroic character.  In fact she seemed damaged and incapable.  She sees danger everywhere and so has trouble bonding with her children and fitting in at home and when taking care of this lost boy who she knows people are trying to kill she doesn't go to the police, she just runs around endangering everyone else.   I also had a a problem with the fact that Nina seems so compassionate to everyone yet doesn't seem to be able to create a relationship with her children or family.

The boys mother on the other hand seemed much more heroic and I actually she thought she was the central character until about half way through the story when I realized the authors were focusing more on Nina.  I have the second book in this series, I got them together so I will try that one and see if these authors can hook me or I think I will just pass on any other books in this series.
Labels: Friis Kaaberbol Nina Borg Scandinavian mystery The boy in the suitcase