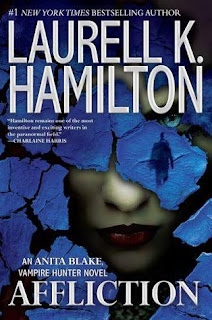 Synopsis: Some zombies are raised. Others must be put down. Just ask Anita Blake.

Before now, she would have considered them merely off-putting, never dangerous. Before now, she had never heard of any of them causing human beings to perish in agony. But that’s all changed.

Micah’s estranged father lies dying, rotting away inside from some strange ailment that has his doctors whispering about “zombie disease.”

Anita makes her living off of zombies—but these aren’t the kind she knows so well. These creatures hunt in daylight, and are as fast and strong as vampires. If they bite you, you become just like them. And round and round it goes…

Where will it stop?

Review: There were times when I seriously considered giving up on this series but I can't seem to drag myself away from the gorgeous men, and crazy life of Anita Blake. While the sex scenes are still plenty and graphic they aren't the main focus of the story anymore.

Zombies are something Anita knows all about but she has never seen Zombies like this.  Flesh eaters that cause their victims to rot from the inside out.  The only time Anita has seen something like this was before she killed the Vampire The Lover of Death.

Cops are not always Anita's biggest fans.  They are scared of her, confused by her, and jealous of her.  The male cops don't like that she is just as tough or tougher than they are, the female cops are jealous of her beauty, and skill, not to mention the dozens of beautiful men who surround her and keep her warm at night.

The last two Anita books have not disappointed.  There was actual story and plot associated with these.  And while I would have liked to hear more about Anita's struggle and fear over her own power I also understand the story needed her to "get over it" and move forward.  There were a lot of really good pieces to this story, and we get some back story on Micah which was interesting. All in all a good read, its always fun to revisit with old friends.
Labels: Affliction Anita Blake Laurell K Hamilton vampire hunter vampires wereanimals