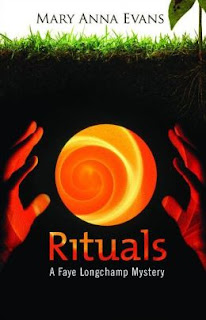 I received this book as an e-galley from netgalley.com it is to be released November 2013

Synopsis: Faye Longchamp doesn’t believe in ghosts. But she’s an archaeologist—dead people are her life.

While working in Rosebower, a rural New York town founded by Spiritualists, Faye is surrounded by people who talk to the dead on a regular basis. When the most influential Spiritualist in town, Tilda Armistead, invites Faye and her project assistant to commune with the dead, she can’t say no. Curiosity is also a cherished part of an archaeologist’s life.

An hour after her crystal ball shows Faye things no rational mind can explain, Tilda is dead. The evidence says that someone trapped Tilda in a small room, nailing its one door shut before setting Tilda’s Victorian home afire. There is no possible way for Tilda to have escaped the blaze, let alone drive for miles before finding Faye and dying in her arms. Yet Tilda did. How? And why?


Faye and Amande are strong independent women but that doesn't take away from Joe, Faye's smart and gorgeous American Indian husband.

Rosebower is a town filled with psychics or at least that what most of them claim to be.  Psychics, spiritualists, etc...Faye is hired to help out at the local museum but during her research she befriends sisters Tilda and Myrna who have been around as long as the town has.  She also finds herself in the company of Toni, a woman who is writing an expose on fake psychics, something that is sure to set off the towns ire.

Fun, light, mystery, I am running over to amazon to purchase one of the other books in this series and do some catching up.
Labels: Creek Faye Longchamp ghosts hoodoo Mary Anna Evans mystery Rituals spirituality