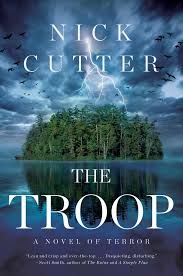 I received an advanced e-copy of this book through netgalley.com.  This title is due to be released January 7 2014.

Synopsis: It begins like a campfire story: Five boys and a grownup went into the woods...

It ends in madness and murder.And worse...

Once a year, scoutmaster Tim Riggs leads a troop of boys into the Canadian wilderness for a three-day camping trip—a tradition as comforting and reliable as a good ghost story and a roaring bonfire. But when an unexpected intruder stumbles upon their campsite—shockingly thin, disturbingly pale, and voraciously hungry—Tim and the boys are exposed to something far more frightening than any tale of terror. The human carrier of a bio-engineered nightmare. An inexplicable horror that spreads faster than fear. A harrowing struggle for survival that will pit the troop against the elements, the infected…and one another.


Review: This book just got creepier and creepier and its going to be hard to write this review without giving too much away.

The "bio-engineered nightmare" left me completely freaked out.  I found myself covering my mouth and inspecting my food many times while reading this book hoping I wouldn't catch it. Lets just say I won't be eating spaghetti for a while.  Some of the scenes may have pushed the limits of my suspension of disbelief but I quickly got over them with the fast pace of this book.

Although quite a few of the boys on this trip I wanted to smack several times over, I also could relate to them.  I have met people like them...well most of them.  The horror of what happens on that island and the aftermath leave me with the creepy crawlies.  It makes you wonder, could it really happen? Scientists have a way of doing things without forethought and then in hindsight try to justify their reasoning despite the fact that their research caused the deaths of many. Makes me think maybe Monsanto should read this book, but thats for a different blog.

If nothing else Nick Cutter exposes that sometimes the biggest danger is fear - although I wouldn't have wanted to catch what they had, fear led many of these kids to do some horrible things. Fear also seems to separates the weak from the strong, and sometimes the strong aren't who you think they would be.  (Never underestimate that nerd in the class!)

Overall this is a creepy read that left me wanting to douse myself in antibacterial soap and take a ton of antibiotics.  If a book can do that its got a thumbs up from me!