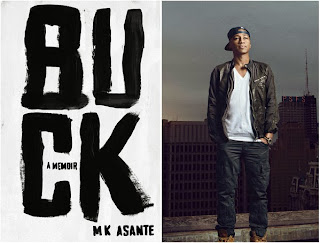 I received an advanced e-galley of this book through netgalley.com. It was released August 20, 2013

Synopsis: MK Asante was born in Zimbabwe to American parents: a mother who led the new nation’s dance company and a father who would soon become a revered pioneer in black studies. But things fell apart, and a decade later MK was in America, a teenager lost in a fog of drugs, sex, and violence on the streets of North Philadelphia. Now he was alone—his mother in a mental hospital, his father gone, his older brother locked up in a prison on the other side of the country—and forced to find his own way to survive physically, mentally, and spiritually, by any means necessary.

Review: Drugs, crime, broken families, and violence is nothing new to this Philly girl but it may be new to some.  This is a story of a brilliant writer who almost lost his battle to grow up. Through diary entries written by his mother and chapters told in the voice of his 15 year old self this is a book that holds you captive. Even though I know this book is written by the voice in the story I still found myself holding my breath in places hoping that things would work out.

This is the story of so many young urban people.  Parents either absent or on drugs, schools that are more like prisons, where teachers have given up hope, and the streets become the schools. The murders, the friends who die too young, the helpless feeling and the lure of drugs and money.  This story is written in a way that is accessible.  That will speak to so many, or at least be familiar.  While we are living in a slightly different time the troubles are still relatively the same.

MK has shared his pain and written a book that could be any inner city kids story, except this one doesn't end in a coffin, it ends with a career, a way out through education.
Labels: Afrocentric Buck crime Drugs memoir MK Asante North Philadelphia Philadelphia