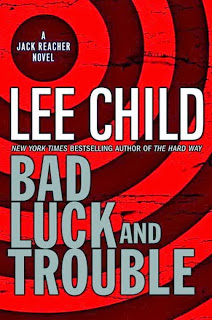 Synopsis: From a helicopter high above the California desert, a man is sent free-falling into the night . . . and Jack Reacher is plunged into the heart of a conspiracy that is killing old friends.

Reacher has no phone, no address, no ties. But a woman from his former military unit has found him using a signal only the eight members of their elite team would know. Then she tells him about the brutal death of one of their own. Soon they learn of the sudden disappearance of two other comrades. But Reacher won’t give up—because in a world of bad luck and trouble, when someone targets Jack Reacher and his team, they’d better be ready for what comes right back at them.

Review: I feel like I'm late to the game with these books, and I haven't started from the beginning but it doesn't seem like you really need to.  I didn't feel like I was missing anything jumping in somewhere in the middle of this series.  Jack Reacher is nothing like Tom Cruise.  I see why there was a big hub bub when he was cast to play him. Jack is a large man, tall and wide.  He seems anti-social and lives life by his own rules.  He drifts from place to place does what he pleases but when his friends are in trouble he is right there to help them get out.  There isn't a lot of thinking when reading these kinds of books, its like a romance novel for adrenaline junkies.  When you want to kick some butt you pull out one of these.  I liked it. I like Jack and I think I'm gonna have to read more of these.
Labels: bad luck and trouble jack reacher lee child