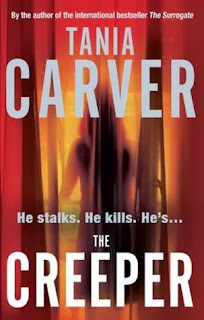 Synopsis: Suzanne Perry is having a vivid nightmare. Someone is in her bedroom, touching her, and she can’t move a muscle. She wakes, relieved to put the nightmare behind her, but when she opens the curtains, she sees a Polaroid stuck to the window. A photo of her, sleeping, taken during the night. And underneath,the words: “I’m watching over you.”
Her nightmare isn't over. In fact, it’s just beginning. Detective Inspector Phil Brennan has a killer to hunt. A killer who stalks young women and insinuates himself into their lives.But the more Phil investigates, the more he delves into the twisted psychology of his query, Phil realizes that it isn't just a serial killer he’s hunting but something—or someone—infinitely more calculating.

Review: This is the 2nd book in this series.  The first book The Surrogate was another nail biter but this book freaked me out.  Stalkers freak me out in general but when one lives in your house and watches you, drugs you and does creepy things to you when you think you are asleep its worse.  I think what gives me the willies is that this kind of stuff does happen.  It doesn't jump the shark, it is a sick twisted mind that does this and there are people like that out there.  I really enjoyed this book.  I love the characters and the creep factor. There were some issues that I wish an editor had caught but they didn't take away the enjoyment of this book.  If you are looking for a fast paced nightmarish thriller this is one for you. I may have to sleep with the lights on for a night or two.
Labels: Brennan Esposito Tania Carver The Creeper The surrogate