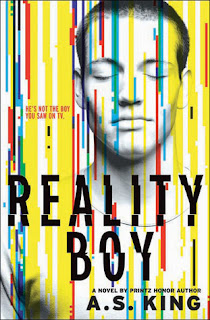 I received a free copy of this book from netgalley.com for an honest review. This title was released October 22, 2013

Synopsis: Gerald Faust started feeling angry even before his mother invited a reality TV crew into his five-year-old life. Twelve years later, he's still haunted by his rage-filled youth--which the entire world got to watch from every imaginable angle--and his anger issues have resulted in violent outbursts, zero friends, and clueless adults dumping him in the special education room at school. No one cares that Gerald has tried to learn to control himself; they're all just waiting for him to snap. And he's starting to feel dangerously close to doing just that...until he chooses to create possibilities for himself that he never knew he deserved.

Review: Reality TV is not really reality.  It is staged for the camera's and for entertainment value.  What you think is real is usually just a small piece of a much larger picture. Gerald Faust became a reality star when he was 5 when his parents allowed a TV crew into their home to "help" with his behavior.  Of course he may have been the star of the show but he wasn't the one who really needed the help.

Now a teenager and still angry at the world Gerald has a choice to make. Does he continue to live in the shadow of his 5 year old self or does he decide to make his own way and show everyone that they were wrong about him? Through this journey he realizes that he may not be the only person who had a shitty childhood and just because it wasn't aired on TV doesn't mean it doesn't hurt just as much.

This book makes you think about what you see on TV and the impact it has on the people who are putting themselves through all this just for their 15 minutes of fame.
Labels: AS King Reality Boy Reality TV