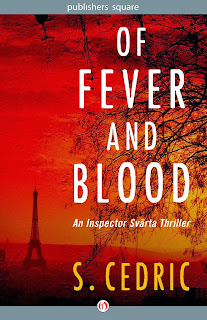 I received an advanced e-galley of this book through netgalley.com. I was published on September 23, 2013

Synopsis: Of Fever and Blood begins at the end of an investigation. Inspector Svärta, an albino profiler, and her colleague Vauvert, solve a series of sadistic ritual murder cases, and the supposed culprits—the Salaville brothers—are killed in a standoff.
However, one year later, the killings start again, this time in Paris. All forensic evidence points to the brothers, but how could that be?

The investigation leads to a discovery of the incredible truth about a killer for whom death is not an option.

Review: Super natural mixed with a mystery thriller.  While John Connelly's Charlie Parker series does this mix really well I felt that this one pushed the envelope a little to far and made it hard to be believable.  I found the book entertaining but there was just something missing. I'm not even sure what it was, maybe credibility of the characters, maybe something else but there was something I kept hoping for that never made it.

Inspector Svarta's character is strong yet broken.  She is haunted by her past and maybe thats where the breakdown was, I just can't see any police department hiring someone as broken as she is.  Thats where John Connelly has it down, Charlie was kicked off the force.

I found the story line and the references to Elizabeth Bathory and her bloody obsession with youth very interesting.  I loved the historical aspect to this book and liked the way the old was intertwined with the new. So there were aspects of this book I liked I just felt the characters were too broken and outside the realm of reality.
Labels: inspector svarta mystery Of fever and blood S Cedric serial killer