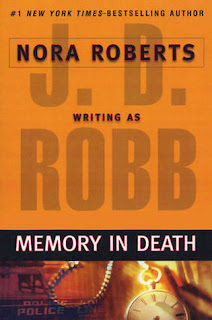 Synopsis: Eve Dallas is one tough cop. It should take more than a seemingly ordinary middle-aged lady to make her fall apart. But when that lady is Trudy Lombard, all bets are off. Just seeing Trudy at the station plunges Eve back to the days when she was a vulnerable, traumatized young girl—and trapped in foster care with the twisted woman who now sits smiling in front of her.

Trudy claims she came all the way to New York just to see how Eve is doing. But Eve’s fiercely protective husband, Roarke, suspects otherwise—and a blackmail attempt by Trudy proves his suspicion correct. Eve and Roarke just want the woman out of their lives. But someone else wants her dead. And when her murder comes to pass, Eve and Roarke will follow a circuitous and dangerous path to find out who turned the victimizer into a victim.


Review: If you've read any of the other books in this series then you know the horror that Eve came from but we don't know what happened after she escaped it. Trudy shows up pretending to be Eve's loving foster mother but Eve knows different, she tortured Eve as a young girl and many others, now she is here trying to make some quick cash.  When she turns up dead the woman Eve wanted nothing to do with suddenly becomes her responsibility.  Who killed her and why, the suspect list is long and no one would blame anyone for killing this horrible woman but its Eve's job to find the killer.  This is one of the better books in this series.  I like getting glimpses into Eve and Roarke's past.
Labels: eve dallas in death JD Robb nora roberts romance