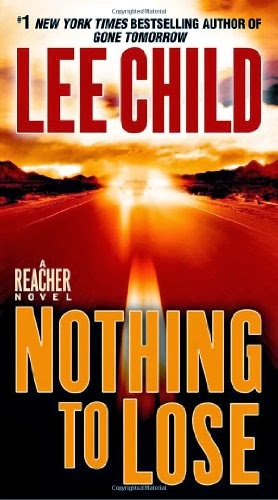 Synopsis: Two small towns in the middle of nowhere: Hope and Despair. Between them, nothing but twelve miles of empty road. Jack Reacher can’t find a ride, so he walks. All he wants is a cup of coffee. What he gets are four hostile locals, a vagrancy charge, and an order to move on. They’re picking on the wrong guy.

Reacher is a hard man. No job, no address, no baggage. Nothing at all, except hardheaded curiosity. What are the secrets that Despair seems so desperate to hide?

With just one ally—a mysterious woman cop from Hope—and many enemies, Reacher goes up against a whole town, hunting the rich man at its core, cracking open his terrifying agenda, asking the question: Who has the edge—a man with everything to gain, or a man with nothing to lose?

Review: This is only my 2nd or 3rd Jack Reacher book.  I have to say he is a quirky character.  Totally unattached to anything just wanders around the USA but if you mess with him or spark his curiosity then look out.  He is like a dog with the sent of a bone.  He will go after it until he gets his answers.

The town of Despair lives up to its name.  Its a dreary little town where everyone who resides there works for the recycling plant in town and answers to the owner of the plant. They also seem to be hiding a secret. People are disappearing through Despair, young able bodied men, and their wives are all staying in Hope, anxious and alone. If this wasn't enough to stir Reachers interest the fact that all he wanted was a cup of coffee from the local Despair diner but was greeted with hostility and a vagrancy charge surely did.

The plot slowly unwound itself and I really didn't know where it was headed but Reachers character is quirky enough to hold your interest wondering what he is going to do next.
Labels: jack reacher lee child