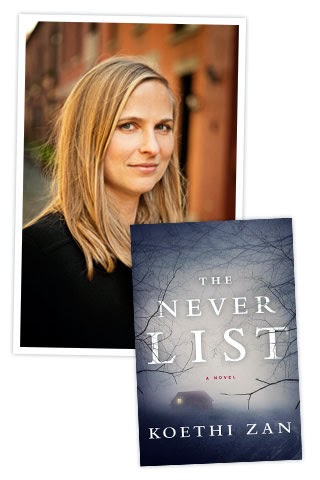 Synopsis: For years, best friends Sarah and Jennifer kept what they called the “Never List”: a list of actions to be avoided, for safety’s sake, at all costs. But one night, against their best instincts, they accept a cab ride with grave, everlasting consequences. For the next three years, they are held captive with two other girls in a dungeon-like cellar by a connoisseur of sadism.

Ten years later, at thirty-one, Sarah is still struggling to resume a normal life, living as a virtual recluse under a new name, unable to come to grips with the fact that Jennifer didn’t make it out of that cellar. Now, her abductor is up for parole and Sarah can no longer ignore the twisted letters he sends from jail.

Review: This is a fast paced thrill ride by a first time author.  The Never List had me holding my breath along with Sarah as she struggles to break through her PTSD in order to help find her friend's body. She figures if she can find the body she can have more evidence against the man who kept them lock up and hopefully keep him from getting paroled. The more she digs though the deeper the rabbit hole seems to go. And what she stumbles on opens a whole new horror that she never expected.  From the downright creepiness of what happens to them to the true horror of it all and finally to the damage that she discovers it did to her is all brilliantly woven together.