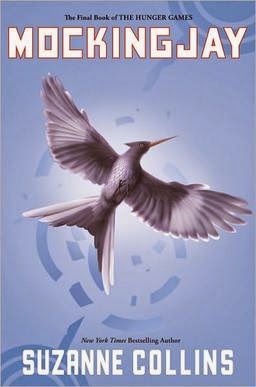 Synopsis: Against all odds, Katniss Everdeen has survived the Hunger Games twice. But now that she's made it out of the bloody arena alive, she's still not safe. The Capitol is angry. The Capitol wants revenge. Who do they think should pay for the unrest? Katniss. And what's worse, President Snow has made it clear that no one else is safe either. Not Katniss's family, not her friends, not the people of District 12. Powerful and haunting, this thrilling final installment of Suzanne Collins's groundbreaking The Hunger Games trilogy promises to be one of the most talked about books of the year.

Review: I know this book has gotten a lot of mixed reviews, more bad than good actually and I'm not sure why.   I thought the dark depressing tone of Mockingjay was right on point with the series.  I mean this is a world where they send kids into an arena to kill each other and the capital calls it entertainment! They are also at war which is not all sunshine and roses. I think some readers may have wanted the fairy tale ending but life doesn't always turn out that way.  Someone who has gone through what Katniss went through would be emotionally damaged goods and she is, but despite all that she continues to move forward and while she isn't very aware of her power she starts to figure out some of the political game. Realizing she is still a pawn in a game is a disturbing reality but Katniss is smart and despite her emotional turmoil she knows how to survive and ultimately how to win.
Labels: Hunger games Katniss katniss Everdeen Mockingjay Suzanne Collins