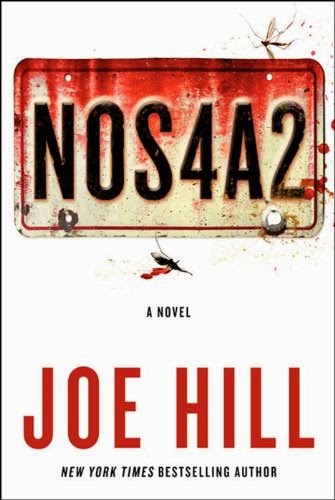 Synopsis: Victoria McQueen has a secret gift for finding things: a misplaced bracelet, a missing photograph, answers to unanswerable questions. On her Raleigh Tuff Burner bike, she makes her way to a rickety covered bridge that, within moments, takes her wherever she needs to go, whether it’s across Massachusetts or across the country.

Charles Talent Manx has a way with children. He likes to take them for rides in his 1938 Rolls-Royce Wraith with the NOS4A2 vanity plate. With his old car, he can slip right out of the everyday world, and onto the hidden roads that transport them to an astonishing – and terrifying – playground of amusements he calls “Christmasland.”

Then, one day, Vic goes looking for trouble—and finds Manx. That was a lifetime ago. Now Vic, the only kid to ever escape Manx’s unmitigated evil, is all grown up and desperate to forget. But Charlie Manx never stopped thinking about Victoria McQueen. He’s on the road again and he’s picked up a new passenger: Vic’s own son.

Review: This story takes place in two different time periods.  One when Vic is a kid, and one when she is older and has a son of her own.  I think I'm going to have nightmares about Charles Manx and Christmasland. Christmas songs may give me the heebie jeebies and vintage rolls royces are something to be terrified of.  Even Manx's dopey sidekick Gas Mask man isn't as terrifying as Manx and his Christmas land.

I loved the spookiness of this book, it wasn't just violent (not that it wasn't violent there were definitely parts that were) it creeped you out sort of like movie The Silence of the Lambs. The idea of the Shorter Way, the other people who can travel to these dimensions and the payment these trips take from the people who travel them is wonderfully creative. My only problem with this book was its length.  I feel like it didn't need to be that long and the story could have been told in a few hundred pages less. Was it worth it? Yea, I think it was but I still think there was some room for editing.
Labels: christmasland joe hill nos4a2 thriller