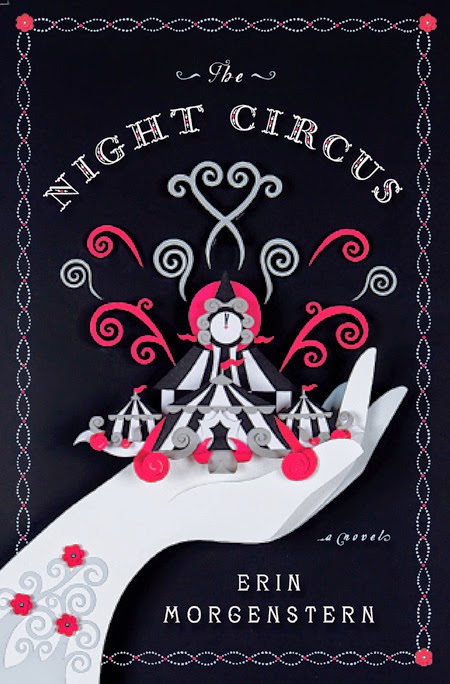 Synopsis: The circus arrives without warning. No announcements precede it. It is simply there, when yesterday it was not. Within the black-and-white striped canvas tents is an utterly unique experience full of breathtaking amazements. It is called Le Cirque des Rêves, and it is only open at night.

But behind the scenes, a fierce competition is underway: a duel between two young magicians, Celia and Marco, who have been trained since childhood expressly for this purpose by their mercurial instructors. Unbeknownst to them both, this is a game in which only one can be left standing. Despite the high stakes, Celia and Marco soon tumble headfirst into love, setting off a domino effect of dangerous consequences, and leaving the lives of everyone, from the performers to the patrons, hanging in the balance.

Review: This is only the second audio book I have completed.  It is read by the same person who read the Harry Potter books, Jim Dale and won an award for it.  He is an amazing narrator and really helped keep you engaged.  I guess my biggest issue with audio books is finding the time to listen to them.  Between reading and doing my normal stuff I find it hard to find the time and wind up with long stretches of time in between listening so I sometimes lose continuity.  That didn't happen with this book though.  No matter how long in between readings I picked up right where I left off.  The narration helped keep me engaged and I was fascinated with how it would play out.

I love the story.  A duel of sorts with neither side really understanding the rules or the objective.  The supporting characters were all interesting and some had secrets of their own that wind up being integral to the plot. Spanning years this story was a mix of mystery, fantasy and romance.  Celia and Marco have a love that can not be or at least its not supposed to be. But that is the least of their worries...most of the book deals with who were the two people who were dueling, who was winning, what was the prize, how is a winner declared? It keeps you guessing until the end.

While the story is really about Celia and Marco it also focuses on Marco's teacher and Celia's father who created this duel to figure out whose method of teaching magic is better than the other and they don't seem to care how many lives they destroy in the process because to them it is only a game.  A sad but very accurate portrayal of most leaders in the world, not caring much about the people only about the end game and who is right and who is wrong.
Labels: audio book celia bowen Circus cirque des reves erin morganstern marco night circus