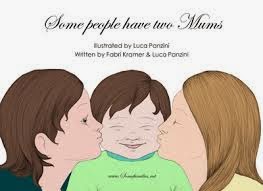 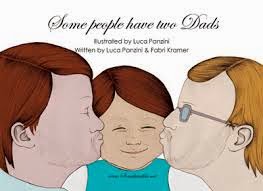 Synopsis: Some People Have Two Mums:Milo is a happy little boy with two mums. We follow him through his bedtime routine and learn how his mothers were helped by a donor to bring Milo into their lives.

Some People Have Two Dads:  It's Daisy's birthday and her two dads give her a portrait of their family. She asks them to tell her about her birth story and afterward she proudly shows off her family portrait to her friends.

An increasing number of lesbian, gay, bisexual, and transgender (LGBT) couples are having children through surrogacy, co-parenting, donor and adoption. The Some Families books have been written to show that families come in many different combinations. Every child deserves a book that reflects their lives. At some point you should explain to your child about same-gender parents. I have written this book as an educational tool to help people understand that families come in a variety of different combinations.

Review: These two books are very cute and would make for a good bedtime read which will probably be followed by them wanting to know their own birth story. In the two Dads book, the couple used a surrogate and in the Mom's story they used a sperm donor. But despite this you could still use this book if you had adopted as a stepping stone to tell your child's adoption story or if you are a heterosexual couple you could use this book to teach your child about other types of families. The pictures are sweet and diverse and they both touch on the many different ways families are formed.
Labels: families gay families lgbt