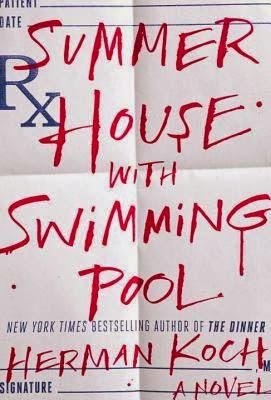 I received an e-galley of this book directly from the publisher through Blogging for Books in exchange for an honest review.

Synopsis: When a medical procedure goes horribly wrong and famous actor Ralph Meier winds up dead, Dr. Marc Schlosser needs to come up with some answers. After all, reputation is everything in this business. Personally, he’s not exactly upset that Ralph is gone, but as a high profile doctor to the stars, Marc can't hide from the truth forever.

It all started the previous summer. Marc, his wife, and their two beautiful teenage daughters agreed to spend a week at the Meier’s extravagant summer home on the Mediterranean. Joined by Ralph and his striking wife Judith, her mother, and film director Stanley Forbes and his much younger girlfriend, the large group settles in for days of sunshine, wine tasting, and trips to the beach. But when a violent incident disrupts the idyll, darker motivations are revealed, and suddenly no one can be trusted. As the ultimate holiday soon turns into a nightmare, the circumstances surrounding Ralph’s later death begin to reveal the disturbing reality behind that summer’s tragedy.

Review: This isn't a story that goes from point A to point B - it sort of meanders around until it finally concludes.  While reading the first half of this book I was wondering whether I would finish it.  I had a hard time getting into it mostly because the main character Marc seemed like a pretentious whiny twit.  Even after finishing it I still thing he is sort of a twit.

Marc is a physician in Holland who cares for a lot of the art world.  He gets through his day by spending 20 minutes with each client realizing that most of the time they just want to be heard instead of treated.  When Ralph Meier walks into his office Marc becomes enamored by his personality. He accepts an invitation to an opening of one of his plays and despite loathing these events he goes. While there Marc meets and is instantly attracted to Ralph's wife while he gets annoyed by how his Ralph looks at his wife.  Confused? Well that's how I felt for a lot of this book.  The main characters thoughts wander from the past to the present with very little warning often leaving you trying to figure out why he is examining someone on the beach,  or why he is talking about hairy asses, until you realize that its just Marc off in his own head.

The second half of the book does pick up a bit while you are trying to figure out who may have committed the deplorable act of violence against Marc's daughter and why Marc's clients wife is screaming that he is a murderer. I'm not sure how satisfying the ending is but it is probably more realistic than one with a neatly tied bow.
Labels: Herman Koch summer house with swimming pool