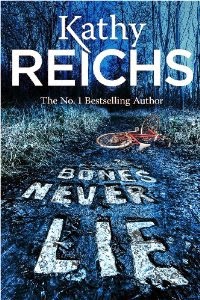 I received an e-galley of this book from the publisher through netgalley.com in exchange for a fair review. This book is set to be released September 23, 2014

Synopsis: Unexpectedly called in to the Charlotte PD’s Cold Case Unit, Dr. Temperance Brennan wonders why she’s been asked to meet with a homicide cop who’s a long way from his own jurisdiction. The shocking answer: Two child murders, separated by thousands of miles, have one thing in common—the killer. Years ago, Anique Pomerleau kidnapped and murdered a string of girls in Canada, then narrowly eluded capture. It was a devastating defeat for her pursuers, Brennan and police detective Andrew Ryan. Now, as if summoned from their nightmares, Pomerleau has resurfaced in the United States, linked to victims in Vermont and North Carolina. When another child is snatched, the reign of terror promises to continue—unless Brennan can rise to the challenge and make good on her second chance to stop a psychopath.

But Brennan will have to draw her bitter ex-partner out of exile, keep the local police and feds from one another’s throats, and face more than just her own demons as she stalks the deadliest of predators into the darkest depths of madness.

Review: Just when you think you have a lead in the case Kathy Reichs yanks the evidence away and gives you something unexpected.  Just like a real investigation you never know what will lie around the next turn.  I like that after all this time and after so many books they can still surprise me a little.  The characters remain the same in many ways but the stories and the incidents keep you guessing.  So it is a little bit like wearing your favorite sweater in a totally new place.  For the most part you are feeling comfortable but yet you still feel out of place.

I love the Kathy Reichs not only gives you a creepy story to follow but she also teaches you something new or at least reinforces something you may have already known about forensics along the way.  She doesn't really dumb down the process, she may dumb down some of the language but the process and science are all there.

Somewhere along the way I must have missed a book or two but it doesn't seem to matter, I was able to jump right back in and find my way through.  I don't know if that would still be the case had I never read any of the other books in this series but if, like me, you got lost somewhere along the way, fear not our faithful friends are still here and you can jump right in and be reunited.