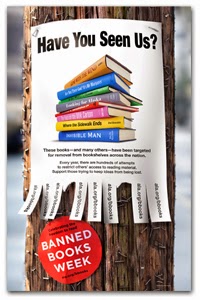 In 2013, there were 307 reported requests for books to be removed from America’s libraries, potentially putting those volumes out of reach of students, readers, and learners of all types. While every corner of the map faces unique issues related to library censorship, these issues also catalyze passionate freedom-to-read advocates dedicated to getting the books back on library shelves. During Banned Book week challenge yourself to read a banned book and get the word out about the freedom to read whatever we choose.  When books are banned we all lose.


Over this recent past decade, 5,099* challenges were reported to the Office for Intellectual Freedom.
Further, 274 materials were challenged due to "occult" or "Satanic" themes, an additional 291 were challenged due to their "religious viewpoint," and 119 because they were "anti-family." Please note that the number of challenges and the number of reasons for those challenges do not match, because works are often challenged on more than one ground. 1,639 of these challenges were in school libraries; 1,811 were in classrooms; 1,217 took place in public libraries. There were 114 challenges to materials used in college classes; and 30 to academic libraries. There are isolated cases of challenges to library materials made available in or by prisons, special libraries, community groups, and students. The vast majority of challenges were initiated by parents (2,535), with patrons and administrators to follow (516 and 489 respectively).

Here is the list from 2013 of the 10 most challenged or banned books: