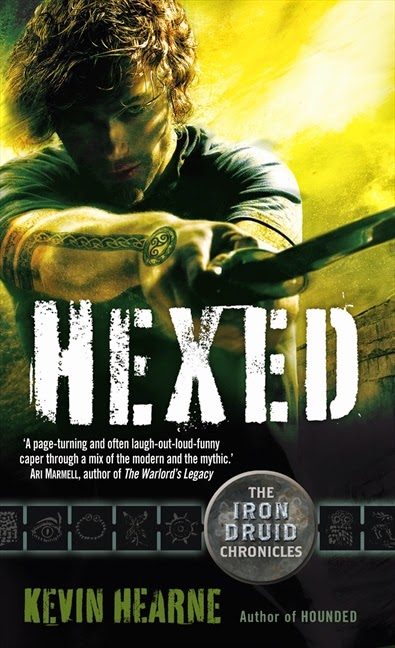 Synopsis: Atticus O’Sullivan, last of the Druids, doesn’t care much for witches. Still, he’s about to make nice with the local coven by signing a mutually beneficial nonaggression treaty—when suddenly the witch population in modern-day Tempe, Arizona, quadruples overnight. And the new girls are not just bad, they’re badasses with a dark history on the German side of World War II.

With a fallen angel feasting on local high school students, a horde of Bacchants blowing in from Vegas with their special brand of deadly decadence, and a dangerously sexy Celtic goddess of fire vying for his attention, Atticus is having trouble scheduling the witch hunt. But aided by his magical sword, his neighbor’s rocket-propelled grenade launcher, and his vampire attorney, Atticus is ready to sweep the town and show the witchy women they picked the wrong Druid to hex.

Review: Book 2 in the Iron Druid series.  I love Atticus and his dog Oberan. I particularly love the dog who loves to watch movies and live in character - right now he is all about the 60-70's and "sticking it to the man". All the characters in the book are great.  The whole book just waffles back and forth between serious and outright funny.  Atticus may be centuries old but he has learned how to fit into modern day and tries to fly under the radar but its getting harder after killing a God.  Now it seems everyone is either scared of him or trying to take him out, not to mention he seems to be caught in a fight between two Godesses both who seem to want a piece of him (literally). Since his cover of being a stupid geeky book store owner is slowly being carved away by incidents beyond his control he now finds himself being more himself, which can be dangerous.  He can sometimes be found wandering the streets naked, riding around town with a sword strapped to his back and turning into different animals to help him escape different situations. So far this series hasn't disappointed and it just seems to be getting better. Can't wait to see what is in store for the druid and his friends next time.
Labels: Atticus Druids hexed Iron Druid chronicles Kevin Hearne magic