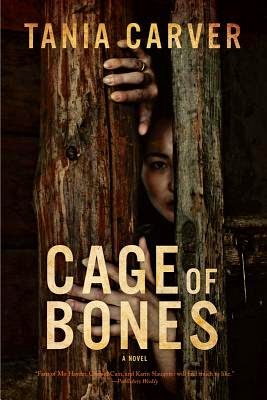 Synopsis: An abandoned building. A dank cellar. And inside it, a cage of bones—with a shocking surprise lurking within. Carver's new thriller will scare the daylights out of you.

Into the house. Down the stairs. Through the dripping dark of the cellar. Someone is there. Someone that shouldn't be there. As a building awaits demolition, a horrifying discovery is made inside the basement: a cage made of human bones—with a terrified, feral child lurking within.

Unbeknownst to Detective Inspector Phil Brennan and psychologist Marina Esposito, they have disturbed a killer who has been operating undetected for thirty years. A killer who wants that boy back. But the cage of bones is also a box of secrets—secrets linking Brennan to the madman in their midst. With the death toll rising and the city reeling in terror, Brennan and Marina race to expose a predator more soullessly evil than any they've ever faced—and one who is hiding in plain sight.

Review: These books are just downright scary.  They remind me of when I first started reading the author Jeffrey Deaver, and how horrifyingly realistic some of his murder plots were.  The fact that they were so random terrified me, and while these murders were not so random its so crazy and gruesome I could see it actually happening.  I don't know what that says about me and my imagination but these books freak me out but I also can't put them down!

Tania Carver knows how to set the stage and make you squirm.  Some of her descriptions may be a bit graphic for some people but she always manages to surprise me.  Normally I can figure out mystery novels and who did what when but her stories are a bit more complex and while I may have an idea of where her stories are headed there is usually a surprise twist.  If you like scary you will like Tania Carver.