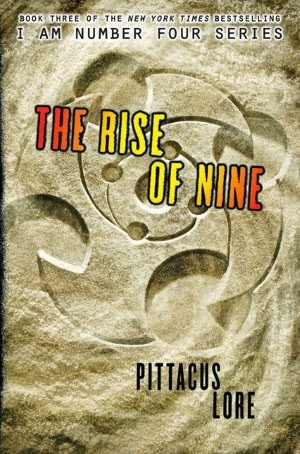 Synopsis: The Mogadorians who destroyed the planet Lorien continue to hunt down the Garde, the small group of Loric survivors who have taken refuge on Earth. The Garde must come together. They are Lorien and Earth’s only hope.

During the dangerous mission at the Mogadorian base in West Virginia, John found and rescued Nine. But even with their combined powers, special abilities known as Legacies, the pair barely escaped with their lives—and they lost Sam in the process.

In order to save our world and their own, John and Nine must join forces with Six, and Seven who have been battling the Mogadorians in Spain, and who are now trying to locate Number Eight in India.

Power in numbers will save us all.

Review: This book didn't hold my attention as much as The Power of Six but it does seem to be tying things together. With Four and Nine separated from Eight, Six, Seven and Ten, the story flips back and forth between the two locations and the two story lines. The end of the book is much better than the beginning but it just doesn't hold the same appeal.  It seems to be held together with pointless action and a weak plot although by the end it seems the writer remembered what he was trying to do not only did it pick up but it kept me wanting to know more.

The book seems to just end which is a little strange.  Then there is a strange addition to the ending where we are apparently learning more about the Lorien children on earth directly from Pittacus Lore and recordings that were apparently "just found". It gives a little background on several of the guard.

I'm hoping that the next book will be a bit better but it seems that each one loses something instead of gaining it.