(65) The Wrath of Angels: A Charlie Parker Thriller 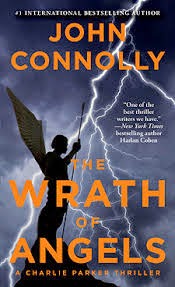 Synopsis: Nature has to be held back, and the trees kept to their domain. The trees . . . and what dwells among them.

Deep in the Maine woods, a wrecked plane is discovered. It was never reported missing, and there are no bodies, but what it conceals is powerful beyond comprehension: a record of those who have struck a deal with the devil.

A new battle is about to commence in the war between light and darkness, and the list proves to be a deadly weapon. While private detective Charlie Parker fears his own name is there, he is certain that it must be secured from evil. For others, too, have joined the search: a beautiful, scarred woman with a taste for killing; a silent child who remembers his own death; and a serial killer known as the Collector. But the woods, too, are preparing, for other secrets lurk within their depths. . . .

Someone survived the crash. Something survived. And now it waits.

Review: I love this series.  It is violent, twisted, scary and dark but for some reason it has sucked me in. This book really delves into the supernatural aspects of this series.  The struggle between light and dark, the fight with fallen angels who are not friends of humans.  You also learn the origins of one of the most terrifying serial killers and where Charlie may fit into the whole strange series of events that started in the first book and has continued through it all.

If you haven't read any of the other Charlie Parker books this one may leave you scratching your head.  It really relies heavily on characters and events that happened in other books.  I think this one was one of the darkest so far but I loved it. A plane crash, a satchel full of money, a mysterious list and a bunch of creepy characters hunting for the downed plane all lead you on a violent crazy race to be the first to find the plane and discover its secrets.  Its a wild ride from page 1.