After the Ending Giveaway & Author interview 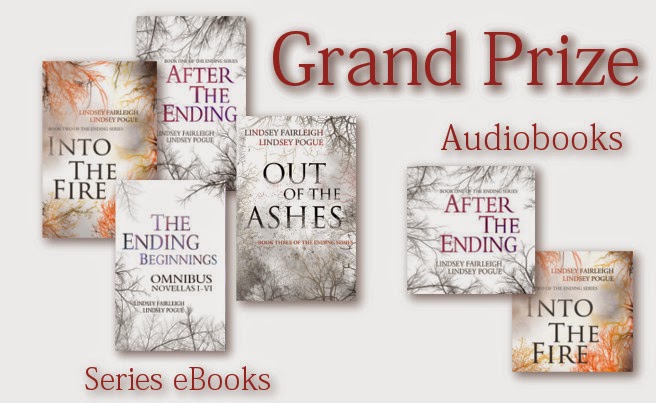 The Authors of The Ending Series have been gearing up to start book four, Before The Dawn, which they will begin writing in January. In the meantime, Team Lindsey is  gearing up for the holiday season, and they have some awesome Ending Series giveaways.

Did you always want to be a writer? If not what did you want to be?

LF: No. When I was younger, and during some of college, I wanted to be an Egyptologist.
I’m still not quite sure why, but I decided to apply to teaching Masters programs rather than
archaeology or Egyptology PhD programs and ended up teaching middle school for a few years.
I don’t regret any of the career choices I’ve made because they’ve led me to discover that writing
is exactly what I should be doing. Sometime down the road I may fit in that Egyptology PhD as

LP: I always loved writing and dreamed of the day I could live the life of an author. However,
I’ve always been a realistic person, perhaps to a fault. I went to school for degrees that were
practical and had jobs that were functional, but I never really found my niche; radio, journalism,
event management, fund raising, personal assistant...all jobs left me wanting. After the death
of someone close to me, I started to ask myself what my regrets would be if I died tomorrow.
Knowing I would regret compromising my dream to be a writer, I decided to do something about it.

Which of your books were easier/harder to write than the others?

LF: For me, writing the second books in both our Ending Series and in my solo Echo Trilogy has
been a lot easier than writing the first books because I already knew the characters so well. That
being said, I made the silly decision to work on two completely different series at the same time,
which sometimes leads to some character and setting confusion in the ol’ noggin.

LP: Although we've researched viruses and some of our settings in order to make The Ending
series more “realistic” and somewhat plausible, we’ve been able to take a lot of liberties in our
storytelling. While I can definitely use creative license in my new project, Wrecked, it’s proving
to be much more of a process since I’m researching regency lifestyle, how to survive on a
deserted island, the clothes aristocrats wear and how they talk, healing properties in plants...the
list goes on. It’s definitely a challenge, but I’m loving the journey!

What can we expect from you in the future? ie More books of the same genre? Books of a different genre?

LF: I can’t imagine ever writing anything that doesn’t include an element of the fantastical. I find
that I quite enjoy exploring the boundaries of real and unreal. I also can’t imagine ever writing
anything completely devoid of a romance storyline, though I would bet that it will usually take
a backseat to whatever the main storyline is (as in After The Ending, Into the Fire, and Echo Prophecy)

LP: Oh boy. I have so many notebooks filled with story ideas that I’d love to pursue, I hope
that one day I can actually get them all down on paper from start to finish. Like LF, all of
them will have a romantic element to them, but I see myself exploring a variety of genres like
contemporary romance, maybe more science fiction, new adult, and historical fiction.

What genre would you place your books into?

LF: Science Fiction Romance. Specifically, Post-apocalyptic Romance for The Ending Series
and Time Travel Romance for the Echo Trilogy. Though the latter also fits quite well in
Paranormal Romance despite its lack of vampires, witches, fae, angels, or shapeshifters.

LP: I think The Ending series could also be considered New Adult, which is a genre I plan on writing more books in.

Where do you get your book plot ideas from? What/Who is your inspiration?

LF: My crazy brain and the characters who live inside my head. I honestly don’t know where
they come from—possibly from my crazy vivid dreams, I suppose. Team plotting is one of the
best parts of co-writing. LP and I usually spend several evenings brainstorming (with wine, of
course!) before we start writing the next book in The Ending Series.

LP: I actually get my ideas from observing the world around me or “staring” as my fiancé
calls it. Whether it’s television, books, the news, the couple sitting beside me in a restaurant
having dinner, I’m always noting interesting story ideas and plot twists to use in the projects I’m working on.

Do you read all the reviews of your book/books?

LF: It depends. I read all of the reviews on a new release to gauge reader reaction. When I’m
working on the next book in a series, I don’t read any negative reviews of the earlier books
because I don’t want any knee-jerk reaction I might have to influence the direction of the book
I’m working on. After all, authors write for the readers who love their books, not for those
who don’t. Haha...I think the funniest (to us) negative review After The Ending received went
something along the lines of: this book would be good if it didn’t have the emotional drama,
superhuman abilities, or romance. Which pretty much is everything that makes The Ending
Series unique. It’s definitely not a tough-guy hardcore guns-a-blazin’ post-apocalyptic tale,
and I think that catches some people off-guard because there aren’t many books in the Post-
apocalyptic genre that aren’t like that.

LP: Agreed 100%. Was for negative reviews, some criticisms can be helpful, others are can be
cruel. It’s one thing to read them initially and get a feel for the overall success of your book, but
it stops there. However, the good reviews are always worth reading

Would you ever ask a reviewer to change their review if it was not all positive about your book/books?

Are there any hidden messages or morals contained in your books? (Morals as in like
Aesops Fables type of "The moral of this story is..")

LF: It’s not really hidden, but we started off writing After The Ending wanting to convey the
idea that things like friendship, love, and hope are what make surviving in post-apocalyptia
worth all of the effort.

LP: We definitely wanted to write science fiction that had emotion in it, that was more realistic
to the human condition. People get scared, they fall down, they question who they are and what
they can handle before they get up and deal with life. We wanted Zoe and Dani to be “real”.

How does the writing process work with two authors?

LF: It’s pretty straight forward the way we do it. I write Dani’s and Mase’s perspectives while
LP write’s Zoe’s perspective. I think the biggest complication is having to mesh timelines,
especially when the perspectives are in the same location.

LP: I have a feeling that Before The Dawn (book four) will be a bit more complicated. Not only
is The Ending Series coming to an end (no pun intended), but like Dani and Zoe first started out,
LF and I live in different states. So, that means that working so closely together, while being so
far away will prove a new obstacle. But I know all will work itself out when we start writing in
January.

Do you ever disagree on the direction of a character or the plot?

LF: Not that I can think of. Usually if one of us has an idea that is different from what we’d been
intending, we discuss it, where it could take the character/story, and how it would change events
in the fictional world down the road. It usually starts with a “Wait...what if...” and then ends
with the story being that much better.

LP: Plus, we’ve gotten really good at taking a step back from the story and our execution to
listen to our intuition. We seem to agree on each other’s input naturally, and I think that stems
from being equally invested in the world we’ve created together...and the fact that we’re such
good friends and generally operating on the same wave length.

Do you write alone as a sole author of a book too? If so which do you enjoy most?

LF: I do—I write Echo Trilogy on my own. I don’t really think I enjoy one more than the other.
They’re just different.

LP: In the near future, I’ll be finishing up my first solo novel, Wrecked, which is a scandalous
Jane Austen story meets Swiss Family Robinson—historical romance with adventure and
survival. It’s so much fun to write, but it’s also a lot of work getting to know new characters
and creating a new, lavish, and colorful world. But at the same time, Zoe and Jake are knocking
around in my brain, wanting to get down on paper, so their equally exciting for me as well.

Do you enjoy writing with another author more than writing alone?

LF: In some ways, very much so, yes. Writing with LP is sort of like having a security blanket
or knowing there’s one of those giant air pillows at the bottom of a long drop (like they use for
movie stunt people). Just knowing she’s by my side makes me braver and my skin thicker. It’s
entirely possible that I’m slightly co-dependent.

LP: There’s definitely something to be said for having a partner in crime. It’s a really great
feeling knowing that there’s someone there who is equally invested and therefore brutally honest
when it comes to decision making. More importantly, there’s someone to celebrate and giggle
with, which are both very important.