(66) The Great Trials of Clarence Darrow 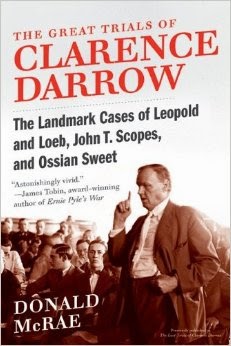 Synopsis: One of the most famous, if controversial, lawyers in America, defense attorney Clarence Darrow was sixty-seven years old in 1924. His reputation was in tatters after a scandalous trial in Los Angeles and his life and career appeared almost over. Then, in rapid succession, he found himself at the forefront of three remarkable courtroom dramas. Each was dubbed "the Trial of the Century" by the press: the trial of teenage Chicago "thrill killers" Nathan Leopold and Richard Loeb; Tennessee's infamous Scopes Monkey Trial, later immortalized in the play Inherit the Wind; and the incendiary case of Ossian Sweet, an African American man accused of murder while defending his Detroit home against a white mob.

Review: Clarence Darrow was a fabulous orator and could hold a courtroom captive with his speeches.  He had just come off a scandalous time in California where he was charged with jury tampering. He now found himself practicing in NY and defending some of the most unsympathetic clients Leopold and Loeb on a charge of murder.  His clients were so unsympathetic and so odd that there was no chance of not having them convicted but he was able to escape the death penalty. After that trial Darrow who thought his career was over after California, found himself front and center in some of the most talked about and important trials ever.

If you have any interest in the law and history this is a fascinating account of one of the best lawyer in America. His home life may have been a mess but no one could ever doubt his prowess in a courtroom. Fascinating read.
Labels: clarence darrow law