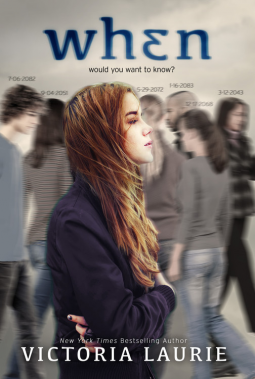 I received this as an advance e-galley from the publisher through netgalley.com in exchange for a fair review. This book is set to be released January 13, 2015

Synopsis: Maddie Fynn is a shy high school junior, cursed with an eerie intuitive ability: she sees a series of unique digits hovering above the foreheads of each person she encounters.

Her earliest memories are marked by these numbers, but it takes her father's premature death for Maddie and her family to realize that these mysterious digits are actually death dates, and just like birthdays, everyone has one.

Forced by her alcoholic mother to use her ability to make extra money, Maddie identifies the quickly approaching death date of one client's young son, but because her ability only allows her to see the when and not the how, she's unable to offer any more insight. When the boy goes missing on that exact date, law enforcement turns to Maddie.

Soon, Maddie is entangled in a homicide investigation, and more young people disappear and are later found murdered. A suspect for the investigation, a target for the murderer, and attracting the attentions of a mysterious young admirer who may be connected to it all, Maddie's whole existence is about to be turned upside down. Can she right things before it's too late?

Review: I wasn't sure about this book at first but it sucked me in and took off running.  Maddie can see death dates but she can't see the why or how a person is going to die, which makes her gift useless and irritating.  She wishes that she could use it to help people but so far every time she has tried she has wound up attracting more unwanted attention to herself and not helping.

When a boy whose date she read goes missing she finds herself as a prime suspect.  When a second kid goes missing her best friend becomes the target of the investigation.  The legal hoops in this story ring very true.  Despite what you want to happen despite lack of evidence people can and are help over for trial.  People who are accused become public targets despite not having been convicted.

This book gets high marks for keeping me guessing and its got a highly rated creep factor.  The home drama gets high marks too because it is something, unfortunately, a lot of kids deal with.  I really enjoyed this book and would pick up another by this author in the future.