(1)The City of Blood 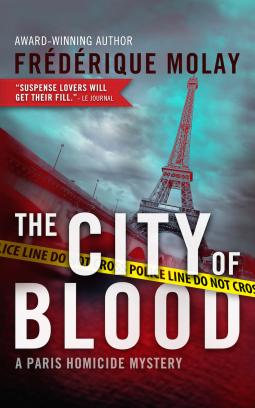 I received an advanced e-copy of this book through netgalley from the publisher. It is due to be published January 20, 2015.

Synopsis: When a major Parisian modern art event gets unexpected attention on live TV, Chief of Police Nico Sirsky and his team of elite crime fighters rush to La Villette park and museum complex. There, renowned artist Samuel Cassian is inaugurating the first archeological dig of modern art, three decades after burying the leftovers of a banquet. In front of reporters from around the world, excavators uncover a skeleton. Could it be the artist’s own son? And does that death have anything to do with the current string of nightclub murders by the “Paris Butcher”? On the site of the French capital's former slaughterhouses, the investigation takes Nico and France's top criminal investigation division from artists' studios to autopsy theaters and nightclubs in hopes of tracking down the murderer who has turned this Paris park into a city of blood.

Review: This is not the first book in this series yet it is the first one I have read. I find it fascinating to read crime fiction from other countries to see how different their laws are from those in the US. Apparently in France there is a statue of limitations on all crimes including murder where there is no limit in the US.  When a skeleton is unearthed in France Chief of Police Nico is determined to bring the killer to justice despite the fact that the statute of limitations has run out.  He may get this opportunity when several other young men all resembling the person whose body is unearthed are found dead.

While not a fast paced novel it is well done, the characters are very personable and there are several plot twists and turns that leave you guessing.  I look forward to following this series in the future.
Labels: frederique molay Paris homicide The city of blood