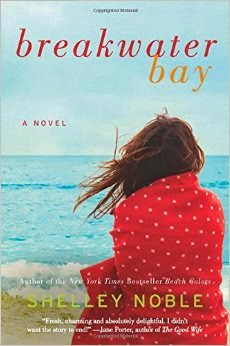 Synopsis: Preservationist Meri Hollis loves her latest project, restoring one of Newport’s forgotten Gilded Age mansions. And with summer approaching, she’ll be able to spend more time with her Gran on the Rhode Island shore. She has a great job, a loving family and she’s pretty sure her boyfriend is going to propose on her thirtieth birthday.

But everything Meri believes about family, happiness, truth, and love is shattered when her family’s darkest secret is exposed.

Thirty years before, Meri’s neighbor and friend, Alden Corrigan, took his father’s dinghy out to fish. In a sudden storm, he rushed to help a woman stranded on the breakwater. She was just a girl . . . a very pregnant girl who disappeared soon after they reached safety—but not before she left behind a very special gift.

Now that the truth it out, life will change for everyone in Breakwater Bay, and Meri and Alden will have to make decisions that could insure their future together . . . or separate them for good.

(8) Review: This book takes readers to the coastal area of Rhode Island, Newport's forgotten Gilded Age Mansions, and a spot I found myself wanting to imagine myself on the beach with a drink in my hand. I found this book to be really enjoyable and a quick read.  I would put this book in the chick lit category for the romantic subplot and hunky supporting characters which is not normally my genre but I enjoyed it nonetheless.

Meri's is turning 30 and nothing is going as she planned.  Her boyfriend who she thought was going to propose marriage to her tells her he took an internship in California and her grandmother reveals a secret that she has been carrying for Meri's whole life.  When Meri finds out that she was illegally adopted and the circumstances surrounding it she starts to question everything in her life.

Shelley Noble's novel is a thought provoking story about choices. One woman who found herself pregnant from a rich family by a boy they didn't deem worthy -  one teenage boy who helped this pregnant woman and saved her life, but is plagued by the loss of his own mother which effects his judgement when it comes to his own children, another mother who lost her own baby, and a mother and daughter who make a choice which will forever affect another life.

Each character is faced with tough choices and each with a different perspective. I loved the character, Gram, as she was definitely the foundation of this family Ultimately this book is also about love and family and knowing that family doesn't necessarily mean blood relations. Its about who is in your heart.
Labels: adoption breakwater bay shelley noble