Review: Actual Innocence: When Justice Goes Wrong and How to Make it Right 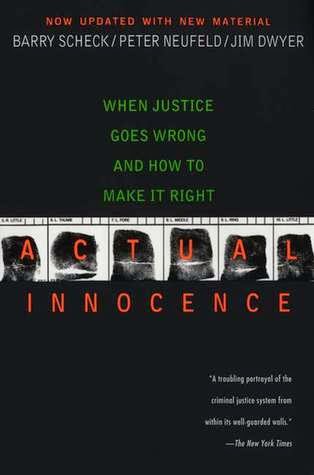 Synopsis: Here are the stories of innocent men and women—and the system that put them away under the guise of justice. Now updated with new information, Actual Innocence sheds light on “a system that tolerates lying prosecutors, slumbering defense attorneys and sloppy investigators” Salt Lake Tribune)—revealing the shocking flaws that can derail the legal process and the ways that DNA testing has often shattered so-called solid evidence that condemned American citizens to death.

(10)Review: Barry Scheck and Peter Neufeld, once lawyers with the Bronx Legal Aid Society, co-founded The Innocence Project, which seeks post-conviction release through DNA testing. They are among the most prominent civil rights attorneys in the U.S. Jim Dwyer is the two-time Pulitzer Prize-winning columnist for the New York Daily News and author of several other books.

I have to reveal that I know Jim Dwyer, he is the brother-in-law of one of my good friends, I've read many of his other books and I have really liked them all, so I may be a bit biased in my review of his books.

If you are a fan of the podcast Serial or the TV show Law and Order or if you wonder about fairness of the criminal justice system in the US, this is a must read.  While the information contained in this book may not help free Adnan Syed, it shows how many people are convicted with faulty evidence and unreliable eyewitness testimony.

Each chapter takes on a different broken part of the justice system, from eye witnesses, to jailhouse, snitches, faulty lab evidence, police misconduct, confessions, lazy attorneys etc... Its terrifying to think of how many people are wrongfully convicted of crimes and how long it takes to get them cleared in this country.  And the even scarier part is that there aren't systems in place to punish those who withhold evidence, force confessions, or give false testimony...most of those people aren't charged, convicted or punished in any way.  There are very few safeguards.

Once convicted of a crime its almost impossible to get back out.  Some systems refuse to allow DNA testing after a conviction leaving innocent people in prison and even more startling are the times when DNA proves the person is innocent and the state won't allow them to be freed saying they must have been guilty in some way. The facts according to the authors are that there are thousands more that could be freed with DNA testing. Although science is not the stop gap for flaws in any criminal justice system, the authors very convincingly argue that it would be a beneficial start.

The stories in this book are accessible and easy to follow but not preachy.  If you have any interest in the law or justice this is a must read.