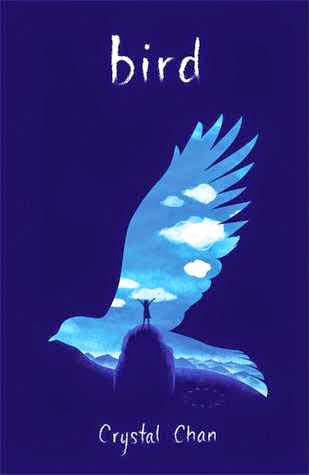 Synopsis: Jewel never knew her brother Bird, but all her life she has lived in his shadow. Her parents blame Grandpa for the tragedy of their family’s past: they say that Grandpa attracted a malevolent spirit—a duppy—into their home. Grandpa hasn’t spoken a word since. Now Jewel is twelve, and she lives in a house full of secrets and impenetrable silence.

Jewel is sure that no one will ever love her like they loved Bird, until the night that she meets a mysterious boy in a tree. Grandpa is convinced that the boy is a duppy, but Jewel knows that he is something more. And that maybe—just maybe—the time has come to break through the stagnant silence of the past.

(9)Review: Bird is a middle school grade novel by first time author Crystal Chan.  Jewel was born on the day her brother, Bird died. His real name was John but Jewel's grandfather called him Bird and after he jumped to his death from a cliff pretending to fly Jewels grandfather hasn't spoken and her family is steeped in grief and despair.

On the eve of her 12th birthday Jewel leaves the house late at night to climb a tree and look at the stars.  In the tree she meets John, a young African-American boy who was adopted by a white family.  Jewel thinks it's weird that she met a boy with her brother's name in a spot out near where he died but the two become good friends. Jewel's father doesn't trust him though.  He believes that John is an a duppy (spirits trapped on earth who cause trouble) who has come to cause more trouble in their family. He goes out of his way to keep John away from his family.

John is visiting his Uncle while his parents get ready to have a baby.  Which brings up many feelings of abandonment, his adoption, and anger in John. While the drama going on in both children's lives at first appear the same by the end you see how very similar their concerns are.  Jewel lives in a house that hasn't let go of the grief and sadness of losing their son, and John believes his parents don't really want him now that they are having their "own" child.

This is a beautifully written book and a well thought out story that really touches on what it means to feel different, how children view the world around them and how we are all connected and can help each other to be whole.  Many books deal with identity and parent and child relationships but Bird is on a completely different level. Bird is a compelling story about values, traditions and relationships that redefines what it means to be a family, I loved this book.
Labels: adoption Bird Crystal Chan grief identity loss