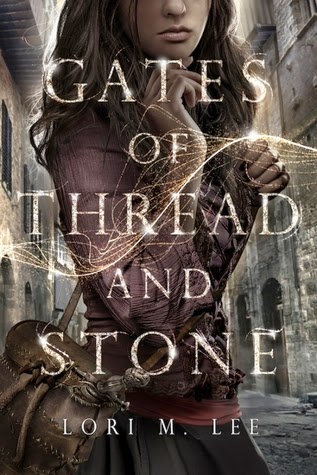 Synopsis: In the Labyrinth, we had a saying: keep silent, keep still, keep safe.


In a city of walls and secrets, where only one man is supposed to possess magic, seventeen-year-old Kai struggles to keep hidden her own secret—she can manipulate the threads of time. When Kai was eight, she was found by Reev on the riverbank, and her “brother” has taken care of her ever since. Kai doesn’t know where her ability comes from—or where she came from. All that matters is that she and Reev stay together, and maybe one day move out of the freight container they call home, away from the metal walls of the Labyrinth. Kai’s only friend is Avan, the shopkeeper’s son with the scandalous reputation that both frightens and intrigues her.

Then Reev disappears. When keeping silent and safe means losing him forever, Kai vows to do whatever it takes to find him. She will leave the only home she’s ever known and risk getting caught up in a revolution centuries in the making. But to save Reev, Kai must unravel the threads of her past and face shocking truths about her brother, her friendship with Avan, and her unique power.

(16)Review: The narrator reads this book very quickly, almost frantically which fits since the main character seems to be in a panic or on the verge of one half the time. The beginning of the book while the story is being set up I found the story a little hard to follow but after about an hour it started to make more sense and I found I couldn't stop listening.

In order to find her brother, Kai has to put her life and those of her friends in danger.  There are pieces of this book that reminded me of the Hunger Games by Suzanne Collins, such as the description of the White Court which was very reminiscent of the description of the Capital where excess rules while everyone else suffers. It also had pieces of the Divergent series by Veronica Roth with the descriptions of the Outlands, and people being banished to them.

But while there are some similarities this definitely has its own tone and its own magic.  Kai can manipulate time, she sees time as threads that she can pull and weave to slow things down or stop, she hasn't learned the full potential of her power or where it came from but she knows its very dangerous if people find out.  When her brother goes missing she is determined to find him and with the help of her friend Avan she emarks on a dangerous journey, but what she finds is not only her brother but also the truth about where she comes from, who she is and finally why her brother was taken in the first place.

Dystopian novels meet magic and weave together a very interesting story.  Apparently this is only the first in a series. I will be picking up the second to see where this is headed.
Labels: Gates of Thread and Stone Jessica Almasy Lori Lee