Review: The Infinite: Gates of Thread and Stone, book 2 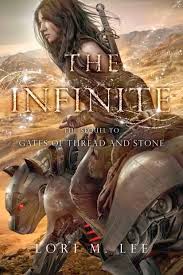 Synopsis: The walls of Ninurta keep its citizens safe.

Kai always believed the only danger to the city came from within. Now, with a rebel force threatening the fragile government, the walls have become more of a prison than ever.

To make matters worse, as Avan explores his new identity as an Infinite, Kai struggles to remind him what it means to be human. And she fears her brother, Reev, is involved with the rebels. With the two people she cares about most on opposite sides of a brewing war, Kai will do whatever it takes to bring peace. But she’s lost her power to manipulate the threads of time, and she learns that a civil war might be the beginning of something far worse that will crumble not only Ninurta’s walls but also the entire city.

(19)Review: The pace of this book was much better than the first one or perhaps I just got used to it.  I didn't feel like I was lost and listening to someone read to me in a foreign language like I did at the beginning of the last book.

Kai's life has gotten very complicated since the first book. She is struggling to come to terms with who she is and what it means.  The two men she loves her brother and Avan are both struggling as well for different reasons. This book picks up only a few months after the last book ends so everyone is still reeling from the events that took place in book 1.

When Kai is given the opportunity to travel to a new kingdom out across the Outlands she jumps at the chance to put a little distance between herself and her problems.  This new land is very different and beautiful but the people and the culture are strange and not always very welcoming.  While there she discovers a new threat, a mystery of who these people were, how they have magic and what is going on in another city nearby that is driving their people insane. She also discovers much more about where she comes from and what she is capable of which is a good thing since there is definitely more going on in this new city than meets the eye.

This book was a great sequel to Gates of Thread and Stone. Full of action and intrigue.  I loved the relationship between Kai and her brother Reev, as Reev struggles against his baby sister who he raised, as she grows up and become a woman. Kai's transformation from defiant young girl to a powerful woman who begins to realize what she could be if she would let herself is well done and believable. I really liked this sequel and felt that was just as good as the first and left me wanting even more.  Can't wait for the 3rd.