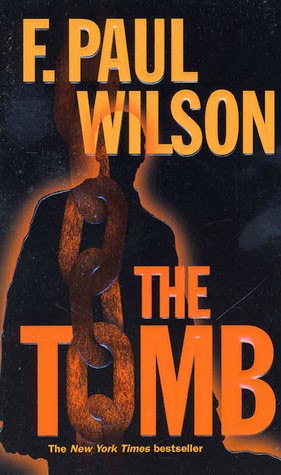 Synopsis: Much to the chagrin of his girlfriend, Gia, Repairman Jack doesn't deal with electronic appliances-he fixes situations for people, often putting himself in deadly danger. His latest project is recovering a stolen necklace, which carries with it an ancient curse that may unleash a horde of Bengali demons. Jack is used to danger, but this time Gia's daughter Vicky is threatened. Can Jack overcome the curse of the yellow necklace and bring Vicky safely back home?

(21) Review: Joe Barrett is a fabulous narrator.  He changes his voice allowing the characters to come alive which helps with the ease of figuring out who is talking.

Jack is not a nice guy.  He is a fixer or situations, and isn't a stranger to violence and death.

Jack is hesitant to take the case of a shady man who wants to recover a stolen necklace of no value but figures its easy money.  He takes the case finds the necklace but soon finds that this case and an other case he is working on to try to woo his girlfriend Gia back are connected and may connected to an ancient cures. Now Gia's daughter Vicky is threatened and Jack can't let anything happen to her.

There are chapters of this book that take place back in time in India to try to bring understanding as to why this family is even attached to these demons but the majority of the book centers around the present. Jack reminds me a bit of John Connolly's, Charlie Parker, except that I don't think Jack deals with the supernatural all that often but since this is only the first book in the series I really can't say that for sure.  Either way Repairman Jack is a very interesting character, he lives off the grid, helps people with their problems and can be lethal. He loves Vicky and Vicky seems to understand Jack better than Gia, and trusts him to keep her safe.

While this is supposed to be a horror book it reads more like a detective novel which may be why I make the connection to the Charlie Parker series.  I really liked this book and Repairman Jack. His attachment to Gia and her daughter keep him human and his character believable.

The writing keeps you wanting to know more, it flows nicely and gives you just enough to keep the story moving forward.  There is apparently a lot of time between this book and the next in the Repairman Jack series but lucky for me I don't have to wait.  There are quite a few more in this series and they are being added to my TBR list immediately.

The main issue I had with this book is that I couldn't listen to it fast enough.  I almost wish that it had been a paperback so that I could have flipped forward or read at my own speed instead of someone elses.
Labels: F. Paul Wilson repairman jack The Tomb