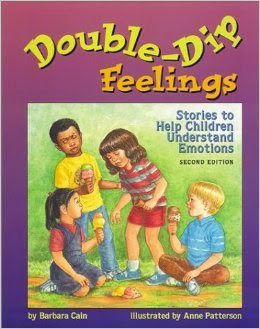 Synopsis: This volume is designed to help children understand emotions, and shows that it is possible to experience two contrasting feelings at the same time, such as feeling both proud and scared on the first day of school. Questions are raised throughout the book to help them cope with the tugs and pulls of emotions that simultaneous and dissimilar feelings can produce. This second edition contains new illustrations.

(22)Review: This book helps children understand that it is possible to feel two ways at the same time. Feelings are complex things and when children have conflicting feeling such as when they are dealing with moving to a foster home or to a new adoptive home from their biological home there can be excitement and sadness.  This book can help facilitate the conversation on having these conflicting feelings and that being perfectly normal.  Nice illustrations and easy to understand text. 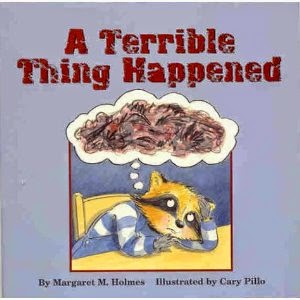 Synopsis: Sherman Smith saw the most terrible thing happen. At first he tried to forget about it, but something inside him started to bother him. He felt nervous and had bad dreams. Then he met someone who helped him talk about the terrible thing, and made him feel better.

(23)Review: Sherman Smith saw a terrible thing and he tries really hard to forget about it but it just makes him angry, gives him nightmares and makes his stomach hurt. When he finally starts talking about what he saw his life becomes better, his nightmares go away and he realizes he isn't as angry.

Research has shown that children who have witnessed violence or trauma are actually affected as strongly or worse than the primary victims. Children who have experienced trauma or witnessed violent deaths can be helped by talking to a parent, teacher, or other adult about their experience. This story can help children to talk about things that are bothering them.  Maybe their terrible thing isn't is different or not as bad as Sherman's but if its keeping them up all night or making them unhappy if they share it and talk about their feelings they will be more likely to move through it.