Review: The Witch of Napoli 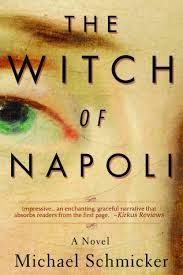 I received an advanced e-copy of this book from the publisher through netgalley.com

Synopsis: Italy 1899: Fiery-tempered, seductive medium Alessandra Poverelli levitates a table at a Spiritualist séance in Naples. A reporter photographs the miracle, and wealthy, skeptical, Jewish psychiatrist Camillo Lombardi arrives in Naples to investigate. When she materializes the ghost of his dead mother, he risks his reputation and fortune to finance a tour of the Continent, challenging the scientific and academic elite of Europe to test Alessandra's mysterious powers.

She will help him rewrite Science. His fee will help her escape her sadistic husband Pigotti and start a new life in Rome. Newspapers across Europe trumpet her Cinderella story and baffling successes, and the public demands to know - does the "Queen of Spirits" really have supernatural powers?

Nigel Huxley is convinced she's simply another vulgar, Italian trickster. The icy, aristocratic detective for England's Society for the Investigation of Mediums launches a plot to trap and expose her. Meanwhile, the Vatican is quietly digging up her childhood secrets, desperate to discredit her supernatural powers; her abusive husband Pigotti is coming to kill her; and the tarot cards predict catastrophe.  Inspired by the true-life story of celebrated Italian medium Eusapia Palladino (1854-1918).

(17)Review: The cover of this book didn't draw me in, although the description of the book left me intrigued, so I was unsure whether or not I would like this but from page one I was riveted. Alessandra and Tomaso really keep you interested and moving the story along in this well written novel about the relationship between religion, science and the paranormal.

Lombardi wants to study Alessandra since she is the first spiritualist who he believes may be real, his nemesis Huxley is shamed by Alessandra and makes it his mission to discredit and ruin her. Both men's reputations hinge on them being right and Alessandra being either real or a fake.  Meanwhile the vatican is upset with her "powers" and also want to discredit her but not in the name of science but in the name of religion, in order to keep and bring people to church they feel they have to discredit anyone who shows any paranormal power believing that only the church has access to the teachings of the spiritual.

Michael Schmicker does a great job of keeping you interested, allowing the mystery of whether or not Alessandra really does have powers or if she is what everyone believes her to be, just a talented trickster. Just when you think you have made your mind up about her the story shifts just a bit and leads you down another path, which leads to a genuinely intriguing story.

Tomaso's observations and genuine care of Alessandra no matter, what bring a source of humanity, innocence and compassion to a story that is filled with characters who you aren't really sure about. Are they good, are they bad, what is their agenda? And everyone seems to have an agenda. Even eventually Tomaso seems to have an agenda but it doesn't take stepping on someone else to achieve it which is what makes him one of the truly likable characters in this novel.