ARC Review: The Book of Speculation: A Novel 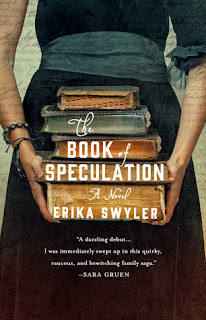 Synopsis: Simon Watson, a young librarian, lives alone in a house that is slowly crumbling toward the Long Island Sound. His parents are long dead. His mother, a circus mermaid who made her living by holding her breath, drowned in the very water his house overlooks. His younger sister, Enola, ran off six years ago and now reads tarot cards for a traveling carnival.


One June day, an old book arrives on Simon's doorstep, sent by an antiquarian bookseller who purchased it on speculation. Fragile and water damaged, the book is a log from the owner of a traveling carnival in the 1700s, who reports strange and magical things, including the drowning death of a circus mermaid. Since then, generations of "mermaids" in Simon's family have drowned--always on July 24, which is only weeks away.

As his friend Alice looks on with alarm, Simon becomes increasingly worried about his sister. Could there be a curse on Simon's family? What does it have to do with the book, and can he get to the heart of the mystery in time to save Enola?

(37)Review: Simon seems like a very sad character.  He has lived in the same town his entire life, his mother committed suicide when he was young and his father wasted away until his death leaving Simon to care for his sister Enola. Simon's house is falling into the sea and he just lost his job, when he receives a mysterious book in the mail, the book holds secrets that seem to pertain to his family.

As Simon starts to peel away the layers of his family the story more and more mysteries are uncovered. Is there a curse on the women in his family? Why have so many of them drowned when their gifts have always included the ability to hold their breath for up to 10 minutes under water?

As the mystery of the book, the past and family ties unravel Simon finds himself more and more trapped in the need to learn more while his house continues to fall apart around him and his sister begs him to leave the past alone and leave the place they once called home.

Simon's sister Enola works for the Carnival following in the footsteps of countless members of their family. Her boyfriend, Doyle, is tattooed with tentacles all over his body leaving him with a mysterious and somewhat scary appearance.  Doyle is wiser than he appears and his charms shines through the pages leaving him as one of the brighter and more vibrant characters in personality and appearance.

Woven in with Simon's story is the story of Amos, the mute tarot card reader from a carnival from the 1700's. The carnival seems to have been struck with mysterious disasters and the book that Simon is investigating seems to be from the owner of this carnival and might hold information regarding the start of the mysterious deaths that plague Simons family.

I really enjoyed this book, by about halfway through I found that I had a hard time putting it down where before that I just was having a good time reading it, then I got sucked in to the point of being obsessed, a dog with a bone or rather Simon with a mysterious book.