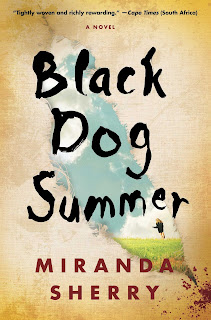 Synopsis: Black Dog Summer begins with a murder, a farmstead massacre, in the South African bush. Thirty-eight-year-old Sally is but one of the victims. Her life brutally cut short, she narrates from her vantage point in the afterlife and watches as her sister, Adele; her brother-in-law and unrequited love, Liam; her niece, Bryony; and her teenage daughter, Gigi, begin to make sense of the tragedy.


Focusing on marriage and fidelity, sisterhood, and the fractious bond between mothers and daughters, Black Dog Summer asks: In the wake of tragedy, where does all that dark energy linger? The youngest characters, Bryony and Gigi, cousins who are now brought together after Sally's murder, are forced into sharing a bedroom. Bryony becomes confused and frightened by the violent energy stirred up and awakened by the massacre while Gigi is unable to see beyond her deep grief and guilt. But they are not the only ones aware of the lurking darkness. Next door lives Lesedi, a reluctant witch doctor who hides her mystical connection with the dead behind the façade of their affluent Johannesburg suburb.

As Gigi finally begins to emerge from her grief, the fragile healing process is derailed when she receives some shattering news and, in a mistaken effort to protect her cousin, puts Bryony's life in imminent danger. Now Sally must find a way to prevent her daughter from making a mistake that could destroy the lives of all who are left behind.

(39)Review: The narrator was fabulous.  Her different voices for the characters really made it feel more like a play than just a narrative.

There have been several reviewers who have compared this book with the Lovely Bones but instead of a dead child narrating the story it is Sally a murdered mother and her niece Bryony.  While you may think this is a story about murder it is more a story about family.  The secrets they keep and the relationships that draw them together or push them apart.

Gigi spends most of her time grieving.  She had more freedom when she lived at home but now she has to live with her aunt and uncle which she doesn't like. While she tries to move forward something else seems to be bothering her, something that she may have seen which may have devastating effects on the family.

While this book was a little slow to build the ending was worth the wait. Beautifully written and very atmospheric of a culture and place few of us have visited. While the subject matter may seem like a downer this book keeps things light enough to move it along.  I highly recommend this book.