I am happy to have Steven Rappaport guest post to ReadingGrrl.com! I posted a review of If Jack Had on June 2, you can find the review here.

I decided that I wanted to give Jack a life that he missed through fiction.  That is how the book was born.   However, I also thought he would enjoy the notion of a man divided between good and evil, each functioning on a different level, yet someone conjoined into a seemingly cohesive and integrated personality.  Jack greatest goal as a young man, was to be a journalist working for the New York Times.  No doubt he had the grey matter, education, and wit, to do that.  His writing chops were extraordinary.  Later on in life, even when the debilitating disease began causing dementia, and he had difficulty communicating clearly, his ability to write a cogent sentence remained undimmed.  But he was also very quietly a very angry person. He kept that well-hidden,  and very few knew that side of him.  I did, and it frightened me. This puzzling aspect of his personality gave me the impetus to give him a double life as a secret assassin.  Writing about it helped explore a mysterious and frightening side of my child. 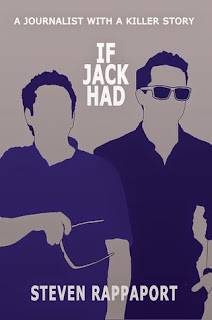 The book is also auto biographical to a certain extent.  I figured in as Jack’s father.  I had a lot of cathartic fun fictionalizing and satirizing my very self-absorbed, and self-obsessed, “enough about me, what do you think about me?” personality.  As they say, write about what you know.  I am quite the easy target. It didn’t take an awful lot of research to be able to do a caricature of myself.  I just had to lean over and ask my wife.  She is always happy to let me know what a fool I am or was. I elaborated on my memory of some of my most cringe worthy behavior.  Years ago, Albert Brooks made a brilliant film about this subject called “Defending Your Life”  He and Meryl Strep starred in the story of a young yuppie killed in his Porsche while leaning over to insert a CD.  Today it would have been texting.  The premises was that after death, one goes to a way station ,where your life is evaluated,  before a decision is made to send you to either Heaven or Hell.  There is a trial of sorts, where you must watch highlights of the most telling incidents, of the best and worst part of your behavior on earth.  The Meryl Streep led a saint like existence.  Albert Brooks not so much.  Hilarious.

The other characters in the book are entirely fictitious, and bear no resemblance to any person living or dead.  Or so I say.  I am not a person to be trusted. I’ll say anything in the service of a good story. To a certain extent they are amalgams of the various characters that have passed through my life. Some more so, some less.  Read the book.  Perhaps you will recognize yourself.


If Jack Had [Black Rose Writing] is available via Amazon, and in brick-and-mortar bookstores nationwide as of June 4, 2015.

Find If Jack Had on Goodreads and at http://ifjackhad.com