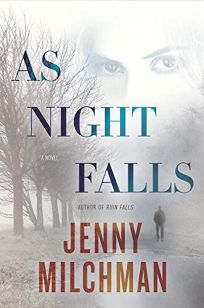 Title: As Night Falls: A Novel by Jenny Milchman

Synopsis: Sandy Tremont has always tried to give her family everything. But, as the sky darkens over the Adirondacks and a heavy snowfall looms, an escaped murderer with the power to take it all away draws close.

In her isolated home in the shadowy woods, Sandy prepares dinner after a fight with her daughter, Ivy. Upstairs, the fifteen-year-old—smart, brave, and with every reason to be angry tonight—keeps her distance from her mother. Sandy’s husband, Ben, a wilderness guide, arrives late to find a home simmering with unease.

Nearby, two desperate men on the run make their way through the fading light, bloodstained and determined to leave no loose ends or witnesses. After almost twenty years as prison cellmates, they have become a deadly team: Harlan the muscle, Nick the mind and will. As they approach a secluded house and look through its windows to see a cozy domestic scene, Nick knows that here he will find what he’s looking for . . . before he disappears forever.

Opening the door to the Tremont home, Nick brings not only a legacy of terror but a secret that threatens to drag Sandy with him into the darkness.

(40)Review: I don't know what it was about this book but it just didn't grab me at the beginning and I struggled with it all the way through. I liked the plot but the characters really lacked something. My favorite character was Harlan, the dimwitted muscle man who seems to have his own set of values. Nick was a sociopath with no charisma and everyone else just seems to be unmemorable.  It was disappointing to me that I didn't like the book when the summary seemed so great.

I wouldn't say this book is terrible.  It had its good points like the plot but honestly I think this might make a better film than a book, it just was lacking something.