ARC Review: Smoke on the Water (Sisters of the Craft Book 3) 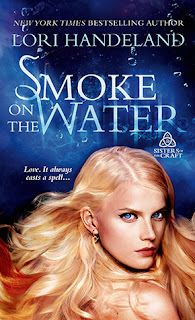 Title: Smoke on the Water (Sisters of the Craft) by Lori Handeland
Publisher: St. Martins Paperbacks
Format: advanced e-galley from the publisher through netgalley.com in exchange for an honest review
Pages:352 pages
Genre: paranormal romance

Synopsis: Reunited after four hundred years, three sisters join together to vanquish the power that tore them apart…and embrace the sorcery that is their birthright.

Abandoned as an infant, Willow Black spent her childhood in foster care, the object of whispers and pity...and rumors about being certifiably crazy. Telling your young friends that you can foresee the future--and summon the rain--is a surefire way to end up in the psychiatric ward. But when Dr. Sebastian Frasier arrives at the facility, Willow's whole life takes a turn. Sebastian is the handsomest man she's ever actually laid eyes on--even though he has been in Willow's visions for years. But not even she could have predicted the storm of passion that engulfs them both. With Sebastian by her side, Willow is emboldened to embrace her history, and the sisters she never knew. Soon, the true power in her blood awakes--and the battle she was born to fight begins. While the temp est rages, Willow must depend on the friends and family she's found--and the man she has loved forever…

(48) Review: The beginning of this book takes place at this same time as book 2, Heat of the Moment, and gives you some insight into what Owen's mother was up to while he was off in Afghanistan and also how she kept appearing at different times to help Becca and her sister Raye.

Willow was found under a Black Willow tree but never adopted.  Her foster families all thought she was crazy when she didn't want to be near water or told them about things that hadn't happened and when they did they were just as Willow had described.

Even Willow thinks she is crazy but one patient, Mary, Owen's mother from book 2, is one of her friends in the facility.  Willow seems to be the only one who can calm Mary down and Mary thinks that Willow is the only one who can help her save the witches.  Seeing as they are both in a mental facility Willow just thinks Mary is nuts until weird things start to happen that make Willow rethink things.

You get the back story on Willow, how she got to the mental health facility and why her sisters can't find her, which is interesting.  Once the sisters are all reunited the story picks up as they try to banish Roland from the earth.  The story had a great ending and I only can hope that someday we will meet these characters again.

Labels: Lori Handeland magic Sisters of the Craft Smoke on the Water Witches