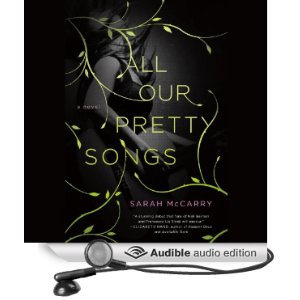 Synopsis: This is a story about love, but not the kind of love you think. You’ll see…

In the lush and magical Pacific Northwest live two best friends who grew up like sisters: charismatic, mercurial, and beautiful Aurora, and the devoted, watchful narrator. Each of them is incomplete without the other.

But their unbreakable bond is challenged when a mysterious and gifted musician named Jack comes between them.

His music is like nothing I have ever heard. It is like the ocean surging, the wind that blows across the open water, the far call of gulls.

Suddenly, each girl must decide what matters most: friendship, or love. What both girls don’t know is that the stakes are even higher than either of them could have imagined. They’re not the only ones who have noticed Jack’s gift; his music has awakened an ancient evil - and a world both above and below which may not be mythical at all. We have paved over the ancient world but that does not mean we have erased it.

(45)Review: Beautifully written with poetic visuals, I would find myself getting lost in her descriptions of places, music, life.  The lives of these two girls are so intertwined that at times I couldn't figure out if their relationship was sisterly, or like lovers.  The narrator is the more stable of the two girls and Aurora is so ethereal she almost doesn't seem real.  Gorgeous and reckless Aurora often gets herself into difficult situations that the narrator saves her from and every now and then Aurora's madness filters over onto the narrator.

Aurora and the narrator's mothers are best friends - one is stable the other not so much, much like their children.  The narrator's mother claims to be a witch and is very worried about her daughter and her friend.  She thinks there is evil lurking around and wants to try to protect them. As Aurora and Jack become entrenched with a man named Minos, they may end up on a path that our narrator cannot travel. As much as she loves them both, the narrator isn't sure if she can save them or if they even want to be saved.

This book is both beautiful and dangerous.  The supernatural elements of the book are woven throughout making you unsure whether it is really happening or if it is in the narrators imagination.
I found it interesting that you never learn the name of the narrator.  We follow her, love with her, and are scared with her but we never learn her name, making her an enigma.  I loved that she was mysterious, yet I felt like I knew her.

I don't think I have ever read a book like this before and I'm glad I found this one.  I can't wait to read the next two books of this trilogy and hope that they are just as poetic and mysterious as this one.