ARC Review: About a Girl (The Metamorphoses Trilogy- Book 3) 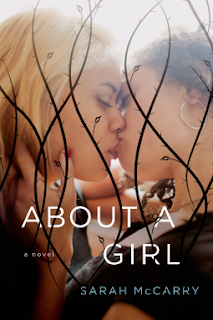 Title: About a Girl: A Novel (The Metamorphoses Trilogy) by Sarah McCarry
Publisher: St. Martin's Griffin
Format: Advanced e-copy from the publisher through netgalley.com in exchange for an honest review
Pages: 272 Pages
Genre:

Synopsis: Eighteen-year-old Tally is absolutely sure of everything: her genius, the love of her adoptive family, the loyalty of her best friend, Shane, and her future career as a Nobel prize-winning astronomer. There's no room in her tidy world for heartbreak or uncertainty--or the charismatic, troubled mother who abandoned her soon after she was born. But when a sudden discovery upends her fiercely ordered world, Tally sets out on an unexpected quest to seek out the reclusive musician who may hold the key to her past--and instead finds Maddy, an enigmatic and beautiful girl who will unlock the door to her future. The deeper she falls in love with Maddy, the more Tally begins to realize that the universe is bigger--and more complicated--than she ever imagined. Can Tally face the truth about her family--and find her way home in time to save herself from its consequences?

(49)Review: The third and final book in this trilogy. I didn't realize this was a trilogy when I requested it from the publisher through netgalley, so when I found out I wanted to hurry up and get to the first books in the series before reviewing this one.  I listened to the other books on Audio and the narrator Renata Freedman's voice was hypnotic and I found myself hearing her voice as I read this one on my e-reader.

This book focuses on Tally, Aurora's daughter who she dropped on her best friends doorstep as an infant. Once again we never learn Aurora's best friends name instead Tally calls her Aunt Beast, and no one else ever refers to her by her name.  As Tally gets older, as with many children whose parents have abandoned them she has questions about her parents that no one is willing to answer, she finds someone who she thinks may be her father and leaves on a quest from New York City to Seattle Washington. The story from there takes on more of the supernatural light that the first two alluded to.
This book was so beautifully written and this whole series is such a nod to Ovid and his famous poem Metamorphosis,the mythology of which, is scattered throughout this final book really tying it all together. Tally may have been a very mature teen but you see her transformation from naive young girl to a more mature young woman by the end of the book.  Her experiences not only transform her but also transform some of the other characters as well. This book is poetic, tragic, mystical and beautiful.  I couldn't put it down.

Labels: About a Girl Sarah McCarry The Meamorphoses Trilogy