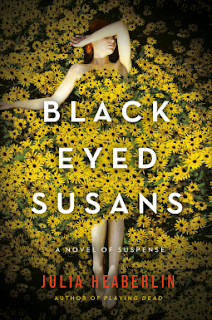 Synopsis: A girl's memory lost in a field of wildflowers.
A killer still spreading seeds.

At seventeen, Tessa became famous for being the only surviving victim of a vicious serial killer. Her testimony put him on death row. Decades later, a mother herself, she receives a message from a monster who should be in prison. Now, as the execution date rapidly approaches, Tessa is forced to confront a chilling possibility: Did she help convict the wrong man?

(55)Review: This is a tough book to review without giving too much away.  I loved it, disturbing with a good flow.  Each chapter goes either back in time to when Tessa was first found and current time while Tessa is trying to figure out what happened to her because she isn't sure that the man who is currently on death row due to be executed any day is actually guilty.

There are some interesting thoughts on the death penalty throughout the book but nothing black or white on either side of the fence.  Tessa has lived her life in fear, that the man she put behind bars is not actually the man who left her in a grave of Black Eyed Susans to die.  As Tessa delves into the past to try to figure out what she is missing she keeps going back to her best friend and how she helped her through the trauma back then and wishes she was there to help her through this. And even though she worries that she might have helped convict the wrong man Tessa is in no way a weak character.  In fact she is very strong and determined, she doesn't and didn't let what traumatized her hold her back.

The ending definitely took a turn I didn't expect.  In fact it left me angry and sad for certain characters whose lives were played with like puppets when they could have been much easier. Any book that can evoke that kind of emotion within the last few chapters get a big thumbs up from me.