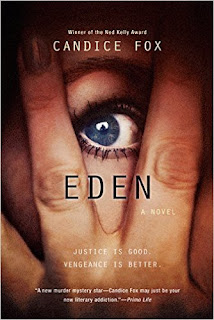 Title:Eden (An Archer & Bennett Thriller) by Candice Fox
Publisher; Kensington Books
Format: I receive this book as an advanced ebook from the publisher through netgalley.com in exchange for an honest review.
Pages: 320 pages
Genre: Thriller

Synopsis: Most homicide detective teams run on trust, loyalty, and the shared desire to put killers behind bars. Frank Bennett's partner, Eden Archer, thrives on darkness and danger. She has a rare talent for catching killers - but her idea of justice has little to do with courtrooms.


Now three girls are missing, and Eden is going undercover to a remote farm where the troubled go to hide and blood falls more often than rain. Frank’s job is to keep an eye on his partner while she's there - but is it for Eden's protection, or to protect others from her? Walking a tightrope between duty and desperation,  Frank confronts a threat from Eden’s past—the sadistic crime lord Hades, who raised her. Suddenly, the hunter is the hunted. And a killer’s vicious desires are about to be unleashed . . .

(58) Review: After reading only a few pages I realized that this book was the second in a series and the characters were so intriguing that I had to pick up the first book.  Despite not having read book 1 I plunged ahead and fell in love with Hades, Eden and Frank.

This book is fast paced and full of mystery.  I loved it.  I couldn't put it down, and there is a bit of a cliff hanger in the epilogue that left me desperate for the next book and this one just came out!

The story delves into Hades past, where he came from and how he came to be what he is, and also where his passion for art came about.  Living in a garbage dump Hades still helps people take care of "trash" but he has his scruples.  His business is being compromised by someone watching him, someone who wants payback for the past, something that he swears he didn't do.

Meanwhile Eden, Hades daughter goes undercover to try to solve a murder and may be underestimating the killer.  Her back up is falling in love with her and Eden being the predator she is doesn't really have time for this. Jack seems torn between Hades, his need to help his partner and trying to get over the death of his girlfriend.

The characters are all really well developed, dark and broken but realistic.  This is definately a series to keep your eyes on, because I have a feeling its only going to get better.