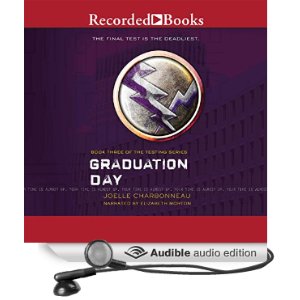 Synopsis: She wants to put an end to the Testing.


In a scarred and brutal future, The United Commonwealth teeters on the brink of all-out civil war. The rebel resistance plots against a government that rules with cruelty and cunning. Gifted student and Testing survivor Cia Vale vows to fight.

But she can't do it alone.

This is the chance to lead that Cia has trained for - but who will follow? Plunging through layers of danger and deception, Cia must risk the lives of those she loves - and gamble on the loyalty of her lethal classmates.

Who can Cia trust?

(53)Review: I actually liked this book the best out of the whole trilogy. While Cia still seems perfect in many ways, this book starts to show her humanity and her flaws and how this whole thing is affecting her. I did find it odd that the President is relying on a child to shift the political power of the Commonwealth but given this society is just as messed up as the one in the Hunger Games I guess nothing is uncommon, although by the end of the book you have more of an understanding of this.

Trying to stop the testing Cia and her friends uncover a conspiracy that could put the rebels in jeopardy.  With little help from the President Cia and her friends have to stop the people who are in charge of putting an end to the rebellion.  Fighting their conscience they find that sometimes people they called friends or family are on the wrong side of this fight and in order to fulfill their goal they may have to commit heinous crimes.

Cia and her friends also uncover what happens to candidates that fail the testing and those findings are terrifying and help to keep them on their path to fulfill their mission.

I felt this book talked more about the consequences of the characters actions on their personalities than the others, in this book what they do they will have to live with instead of the previous books where they were given serum to forget. In addition, Cia has to put her personal feelings aside and focus on what is best for all of her friends and the future generations.

This book twists and turns and you start to wonder who is working with who and what everyone's real agenda is which makes it a little hard to follow but also much better than the last two. In this book you start to understand the choices Cia has to make and you have to try to figure out if someone is your enemy or your ally.  By the end Cia has really changed and you wonder what her future holds.  It ends without much of an answer to that question which was okay because finally things in this series weren't so predictable.