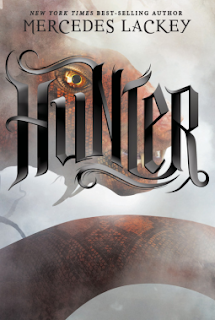 Title: Hunter by Mercedes Lackey
Publisher: Disney-Hyperion
Format:Advanced e-copy from the publisher through netgalley.com in exchange for an honest review
Pages: 384 pages
Genre: Fantasy, YA

Synopsis: They came after the Diseray. Some were terrors ripped from our collective imaginations, remnants of every mythology across the world. And some were like nothing anyone had ever dreamed up, even in their worst nightmares.

Long ago, the barriers between our world and the Otherworld were ripped open, and it's taken centuries to bring back civilization in the wake. Now, the luckiest Cits live in enclosed communities,behind walls that keep them safe from the hideous monsters fighting to break through. Others are not so lucky.

To Joyeaux Charmand, who has been a Hunter in her tight-knit mountain community since she was a child, every Cit without magic deserves her protection from dangerous Othersiders. Then she is called to Apex City, where the best Hunters are kept to protect the most important people.

Joy soon realizes that the city's powerful leaders care more about luring Cits into a false sense of security than protecting them. More and more monsters are getting through the barriers,and the close calls are becoming too frequent to ignore. Yet the Cits have no sense of how much danger they're in-to them, Joy and her corp of fellow Hunters are just action stars they watch on TV.

When an act of sabotage against Joy takes an unbearable toll, Joy uncovers a terrifying conspiracy in the city. There is something much worse than the usual monsters infiltrating Apex. And it may be too late to stop them.

(61)Review: Its been a long time since I've read a Mercedes Lackey book and now I'm wondering why it took me so long to come back to this amazing author. I love her writing and her ability to bring you into a world that is like our own yet different. This is an interesting take on civilization trying to rebuild itself despite the fact that the world has now changed.  All kinds of fantastical mythical creatures now try to slip into the world only to be stopped by what are called Hunters.

Hunters are like Gladiators in Apex city each with their own TV channel and rankings.  Cameras follow them everywhere. As Joy takes her place among the many Hunters in Apex where her Uncle is a very important person she starts to question why the TV modifies what the Cits are allowed to know.  Slowly she starts to uncover a political plot that could put her in danger. Not knowing who to trust she tries to stay alive long enough to figure out what to do.

I can sort of see why people are comparing this book to the Hunger Games but there is no fight to the death winner takes all type competition going on here.  And while this book is slow to build there are a lot of classic Lackey moments that made me glad to be reading her again.  I'm interested in how this series will pan out and hope that it continues to evolve and get better.  The plot was intriguing and some of the back story about where Joy grew up could become a series of its own. Not Lackey's best book but a solid new chapter in her line of books.