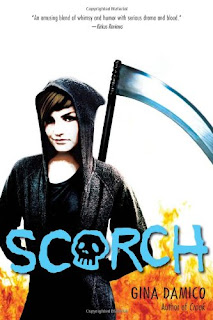 Synopsis: Sixteen-year-old Lex Bartleby is a teenage grim reaper with the bizarre ability to Damn souls. That makes her pretty scary, even to fellow Grims. But after inadvertently transferring her ability to Zara, a murderous outlaw, Lex is a pariah in Croak, the little town she calls home. To escape the townspeople’s wrath, she and her friends embark on a wild road trip to DeMyse. Though this sparkling desert oasis is full of luxuries and amusements, it feels like a prison to Lex. Her best chance at escape would be to stop Zara once and for all - but how can she do that from DeMyse, where the Grims seem mysteriously oblivious to Zara’s killing spree?

(60) Review: I love love love this series.  This sequel picks up very soon after the last book ends.  Lex wants to go back to Croak but feels weird about leaving now that her twin sister was killed.  Her father gives her his blessing to go and find the person who did this.

As she returns to Croak, Lex finds herself an outcast her Uncle under fire from some of the townspeople and Zara is continuing to kill and damn people and now she is turning her sights to Croak.  Can Lex find a way to clear her name and save her new town?

This 2nd book in the Croak series packs all the same humor, suspense and mystery.  New characters are introduced and play an active role in the story line.  The plot is getting more complicated, with more intensity and more at stake.

I just can't say enough about how creative, and inventive this series is. Gina Damico has found the voice of so many teens and packed them into this riviting, mysterious series.