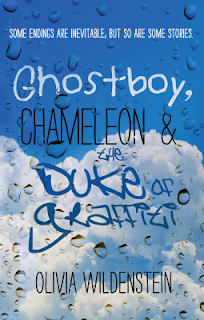 Title: Ghostboy, Chameleon & the Duke of Graffiti by Olivia Wildenstein
Publisher: Createspace
Format: e-book from the publisher through netgalley.com in exchange for an honest review
Pages: 319 pages
Genre: YA, Teen

Synopsis: Cora Matthews, the principal’s gloomy goth daughter, is not exactly popular Duke Meyer’s type. Still, Duke finds himself inexplicably drawn to her dark eyes and mysterious manner. She makes it clear she doesn’t return his admiration, but when a burst appendix lands Duke in the hospital, he and Cora will be forced to come together by the most unlikely intermediary: her eight-year-old brother, Jaime.

Duke learns Jaime has brain cancer and little chance of long-term survival. He admires the kid’s plucky positivity and wild imagination and offers to write a story about Jaime’s make-believe superheroes. So begins an epic tale—that of Ghostboy, Chameleon and the Duke of Graffiti—and a deep friendship between Duke and Jaime.

Despite their outward differences, Cora and Duke bond over their affection for Jaime, but unintended betrayal and Jaime’s advancing disease threaten to derail their blossoming romance before it can truly take root.

Review:This is a fabulous YA book that reminded me of John Green's books.  Duke is a pretty boy who hangs with the popular kids and is trying to get initiated into a secret society within his school. During his initiation he gets caught and finds himself sentenced to help clean up the school. It is during this time that he meets Cora, the Goth girl who for reasons he can't seem to explain intrigues and excites him.

Duke lives with his mom, dad and grandmother.  The interplay between Dukes mother and grandmother give this book some much needed comic relief to what could be a downer of a book. Don't get me wrong I cried, but I also found myself laughing and smiling through some of those tears. I was totally drawn in by the characters and despite knowing just as all the other characters did that Jaime's prognosis was not good it still hurt when anything went wrong and I still was hoping for a miracle.

However, Jaime also has a fabulous upbeat outlook on life and as much as we all think that Duke was helping him I think it was very mutual.  What Duke learned from working with Jaime was about living life to the fullest. Not to take things so seriously and laugh at yourself once in a while.  I highly recommend this book, especially if you are a John Green fan.

Labels: Ghostboy Chameleon & the Duke of Graffiti Olivia Wildenstein ya