Book Review: God and Jetfire: Confessions of a Birth Mother 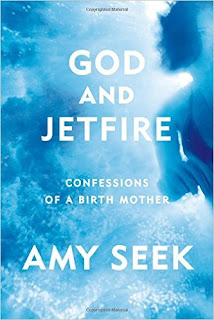 Synopsis: God and Jetfire is a mother's account of her decision to surrender her son in an open adoption and of their relationship over the twelve years that follow. Facing an unplanned pregnancy at twenty-two, Amy Seek and her ex-boyfriend begin an exhaustive search for a family to raise their child. They sift through hundreds of "Dear Birth Mother" letters, craft an extensive questionnaire, and interview numerous potential couples. Despite the immutability of the surrender, it does little to diminish Seek's newfound feelings of motherhood. Once an ambitious architecture student, she struggles to reconcile her sadness with the hope that she's done the best for her son, a struggle complicated by her continued, active presence in his life.

Review: Amy Seek writes a gutwrenching account of placing her son for adoption. Seek has an open adoption with the adoptive family of her son, this means that she meets with them, talks to them and exchanges correspondence.  At the beginning of any adoption these days the power really lies with the mother.  She is carrying the child, she gets to choose a family, and ultimately it is up to her to decide if she can go through with placement.

Seek and her then boyfriend Jevn, take finding a family very seriously.  They compose a list of about 100 questions to ask families to see if their values are the same, they interview couples and really take the whole process of finding the "right" family very seriously. After several hours of labor Seek decides to nurse her son, and then ultimately starts having second thoughts.  She winds up taking him home and parenting him for about a month before she relinquishes her rights.  Given that she had a strong support system and people willing to help I found this book really lacking in the reasons why she decided to place.  Its a huge missing gap.

Throughout the book you can feel the grief, anger and frustration that Seek still seems to be dealing with regarding her placement of her son, who by the end of the book is a preteen.  After placement the power shifted to the adoptive parents and away from Seek leaving her powerless and lost with her emotions.  I'm not sure where all the support that she was offered to keep her child went after she placed her baby but this seems to also be a major hole in the story.

Despite these big issues and some others that crop up regarding Seek's later pregnancies I don't think I have ever read a more honest and soul bared account of placing a child for adoption. The mix of emotions, grief, anger, happiness, relief, frustration, loss, etc are laid bare for the reader.  However that being said some of those emotions often felt detached and just out of reach. This book is a good conversation starter, because as this book proves there is so much more to adoption than just placing a baby, its a lifelong commitment and a lifelong journey for everyone involved in the process.